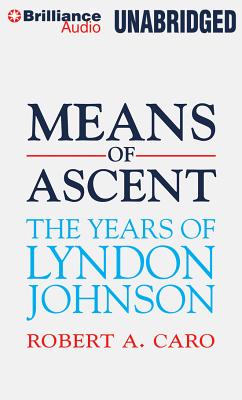 Robert A. Caro's life of Lyndon Johnson continues--one of the richest, most intensive and most revealing examinations ever undertaken of an American President. It is the magnum opus of a writer perfectly suited to his task: the Pulitzer Prize-winning biographer-historian, chronicler also of Robert Moses in The Power Broker, whose inspired research and profound understanding of the nature of ambition and the dynamics of power have made him a peerless explicator of political lives. The Path to Power, the first book of The Years of Lyndon Johnson, was greeted on its publication with a wave of acclaim, received the National Book Critics Circle Award and became a nationwide bestseller.

And here, with the narrative passion and the unique gift for making us grasp the way the world really works that distinguish all his writing, Caro brings alive Lyndon Johnson in his wilderness years.

In Means of Ascent, Johnson's almost mythic personality--part genius, part behemoth, at once hotly emotional and icily calculating--is seen at its most nakedly ambitious. This multifaceted audiobook carries the President-to-be from the aftermath of his devastating defeat in his 1941 campaign for the Senate--the despair it engendered in him, and the grueling test of his spirit that followed as political doors slammed shut--through his service in World War II (and his artful embellishment of his record) to the foundation of his fortune (and the actual facts behind the myth he created about it).

The culminating drama--the explosive heart of the audiobook--is Caro's illumination, based on extraordinary detailed investigation, of one of the greatest political mysteries of the century. Having immersed himself for fourteen years in Johnson's life and world, tracking down hundreds of people who knew LBJ in Texas, in Washington and across the country, Caro is able to reveal the true story of the fiercely contested 1948 senatorial election, for forty years shrouded in rumor, which Johnson was not believed capable of winning, which he "had to" win or face certain political death and which he did win--by 87 votes, the "87 votes that changed history."

Telling that epic story in riveting and eye-opening detail, Caro returns to the American consciousness a magnificent lost hero. He focuses closely not only on Johnson, whom we see harnessing every last particle of his strategic brilliance and energy, but on Johnson's "unbeatable" opponent, the beloved former Texas Governor Coke Stevenson, who embodied in his own life the myth of the cowboy knight and was himself a legend for his unfaltering integrity. And ultimately, as the political duel between the two men quickens--carrying with it all the confrontational and moral drama of the perfect Western--Caro makes us witness to a momentous turning point in American politics: the tragic last stand of the old politics versus the new--the politics of issue versus the politics of image, mass manipulation, money and electronic dazzle.

Means of Ascent is the second book in a multivolume work that will stand as the political biography of our time.