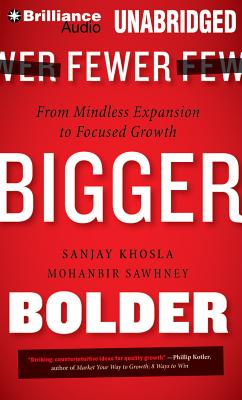 From Mindless Expansion to Focused Growth

Now Khosla and Sawhney have combined their experiences into a seven-step model for sustained profitable growth in any market, based on fewer but better bets. Drawing on case studies that feature dozens of companies, from Cisco to Hyatt to Spirit Airlines, the authors show how their program applies to global giants, small startups, and any organization in between.

Fewer, Bigger, Bolder is contrarian and sometimes startlingly counterintuitive. But in an era of chronically tight budgets and dangerously short attention spans, it provides a proven formula for moving ahead with success.