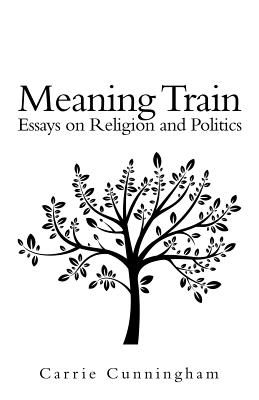 Essays on Religion and Politics

Meaning Train is a collection of essays, based on books and interviews, that counter the divisive practice of subjugating others. It reveals a benign moral compass in which anyone who wants to improve the world can follow.

The inspiration for the book is the idea of a beloved community honed during the civil rights movement in the 1960s. Based on the example of Jesus Christ, the notion guided leaders like Martin Luther King, Jr. in addition to John Lewis and Fannie Lou Hammer. Together, with love and care in their hearts, they ended the segregation laws of Jim Crow and black disenfranchisement.

The book brims with soul and empathy. It outlines the issues of our era with ideas of human dignity. The essays include the struggle for racial equality in America and South Africa; the agony of the Holocaust and the battle for peace among Israelis and Palestinians; the lives of Mary Magdalene and Jesus Christ and Christian feminist theology; the morally right fight against Islamophobia and the need for pluralism in the Middle East; and the contributions of historian David McCullough and politician Bobby Kennedy.

The panoply of essays will captivate and stir the human soul.

"(Carrie Cunningham's) writing steels the prophetic voice for social action, reminding us of the foundation we stand on, forged in fire by our forebears in the struggle."

Carrie Cunningham is a progressive Christian writer. She graduated from Harvard College where she studied American and African history, and additionally, she attended the University of the South and Wayne State University for degrees in the Episcopal faith and Near Eastern Studies respectively. She captained the national championship team for Harvard women's squash. A prolific writer since the 1990s, she has written for the Grosse Pointe News, the Michigan Chronicle, the Episcopal Record, Examiner.com and Beloved Community. She lives in Grosse Pointe Farms, Michigan.
or support indie stores by buying on
Copyright © 2020 American Booksellers Association