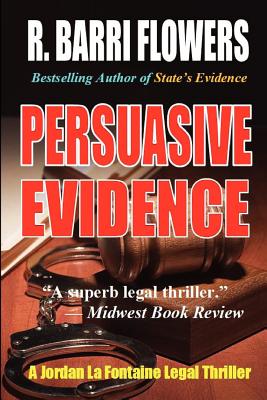 It is five years before the millennium and Multnomah County Deputy District Attorney Jordan La Fontaine is in line to be the next Chief of the Homicide Division Bureau. But Jordan's world turns upside down when her teenage son is accused of a double homicide and her competition for the post, Jerrod Wresler, is assigned to prosecute the case. She enlists the services of Simon McNeil, her late husband's law partner, to defend him. At the same time, Jordan is preparing to try a decorated Portland police detective, Graham Turner, accused of viciously murdering his ex-wife. Causing Jordan further grief is Turner's hardnosed partner, Detective Harry Coleman, who will stop at nothing to prove his innocence. As Jordan moves back and forth between the two tough cases and deals with issues in her personal life, she must use all of her resources to clear her son's name and convict a cop of murder. PERSUASIVE EVIDENCE is the first in an exciting new legal crime series from the bestselling author of STATE'S EVIDENCE and JUSTICE SERVED.

R. Barri Flowers is the author of bestselling mystery and thriller fiction, including KILLER IN THE WOODS, DARK STREETS OF WHITECHAPEL, SEDUCED TO KILL IN KAUAI, STATE'S EVIDENCE, and JUSTICE SERVED. Other novels by the author include the romance novel FOREVER SWEETHEARTS, and the young adult haunted house mystery GHOST GIRL IN SHADOW BAY. He is also the author of such bestselling true crime books as THE SEX SLAVE MURDERS, SERIAL KILLER COUPLES, and the editor of the anthology MASTERS OF TRUE CRIME. Follow R. Barri Flowers author on Twitter, Facebook, LinkedIn, YouTube, Goodreads, LibraryThing, CrimeSpace, MySpace, and www.rbarriflowers.com.
or support indie stores by buying on
Copyright © 2020 American Booksellers Association