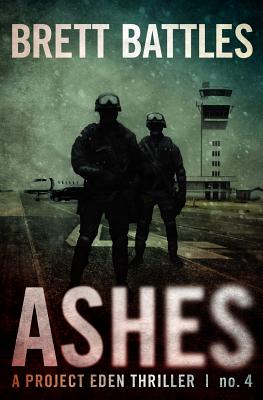 From thriller and suspense master Brett Battles comes Ashes, the fourth book in the continuing Project Eden thriller saga. The hammer has fallen. The deadly Sage Flu has been unleashed. The scramble for survival is in full force. Martina Gable and her family escaped to a secluded mountain cabin in hopes of avoiding the death sweeping the desert valley below, but have they gone far enough? Dominic Ray, manager of a tropical, private island resort, has a dream job. The weather, the food, the drinks, the people-life couldn't be better. What he doesn't expect-what no one could have expected-is that his good life is about to disappear. In a sea of the sick and dying, Sanjay and Kusum desperately search for a place beyond Mumbai where they and the group they are leading can be safe, and where they can prepare for what the future may bring. Brandon Ash wants nothing more than to be with his father and sister, but there is something waiting for him on a deserted, snow-covered highway. Something that may mean the reunion will never happen. As Daniel Ash, Brandon's father, lies unconscious from the serious wounds he suffered while hunting for his son, his daughter Josie realizes it's up to her to find her brother and bring him home. But the search will be a dangerous one, that will take her far from home. And then there is Project Eden, watching the plague kill as they had planned, even as they prepare to activate the next phase. What will you do to survive? Ashes is best read after completing volumes 1-3 (Sick, Exit 9, and Pale Horse)

Brett Battles is the author of over a dozen novels and several short stories. His second novel, THE DECEIVED (part of his Jonathan Quinn series), won the Barry Award for Best Thriller. He is one of the founding members of Killer Year, and is a member of International Thriller Writers. He lives and writes in Los Angeles. More info available at www.brettbattles.com.
Loading...
or support indie stores by buying on