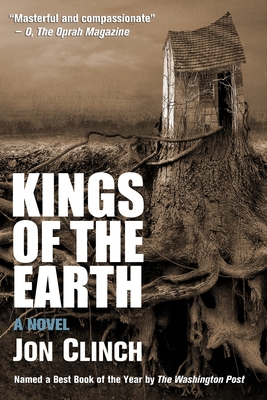 Following up Finn-his much-heralded and prize-winning debut whose voice evoked "the mythic styles of his literary predecessors...William Faulkner, Toni Morrison, Cormac McCarthy and Edward P. Jones" (San Francisco Chronicle)-Jon Clinch returns with Kings of the Earth, a powerful and haunting story of life, death, and family in rural America. The edge of civilization is closer than we think. It's as close as a primitive farm on the margins of an upstate New York town, where the three Proctor brothers live together in a kind of crumbling stasis. They linger like creatures from an older, wilder, and far less forgiving world-until one of them dies in his sleep, and the other two are suspected of murder. Told in a chorus of voices that span generations, Kings of the Earth examines the bonds of family and blood, faith and suspicion that link not just the brothers but their entire community. Vernon, the oldest brother, is reduced by work and illness to a shambling shadow of himself. Feebleminded Audie lingers by his side, needy and unknowable. And Creed, the youngest of the three and the only one to have seen anything of the world (courtesy of the U.S. Army), struggles with impulses and accusations beyond his understanding. We meet Del Graham, a state trooper torn between his urge to understand the brothers and his desire for justice; Preston Hatch, a neighbor who's spent his life protecting the three men from themselves; and a host of other living, breathing characters whose voices emerge to shape this sprawling but deeply intimate saga of life, death, and the human condition at its limits.

About Jon Clinch: Born and raised in the remote heart of upstate New York, Jon Clinch has been an English teacher, a metalworker, a folksinger, an illustrator, a typeface designer, a housepainter, a copywriter, and an advertising executive. His first novel, Finn-the secret history of Huckleberry Finn's father-was named an American Library Association Notable Book and was chosen as one of the year's best books by the Washington Post, the Chicago Tribune, and the Christian Science Monitor. It won the Philadelphia Athenaeum Literary Award and was shortlisted for the Sargent First Novel Prize. His second novel, Kings of the Earth-a powerful tale of life, death, and family in rural America, based on a true story-was named a best book of the year by the Washington Post and led the 2010 Summer Reading List at O, The Oprah Magazine. Jon has lectured and taught widely, in settings as varied as the National Council of Teachers of English, Williams College, the Mark Twain House and Museum, and Pennsylvania State University. In 2008 he organized a benefit reading for the financially-ailing Twain House-enlisting such authors as Tom Perrotta, Stewart O'Nan, and Robert Hicks-an event that literally saved the house from bankruptcy. A native of upstate New York, Jon lives with his wife in the Green Mountains of Vermont. They have one daughter.
Loading...
or support indie stores by buying on