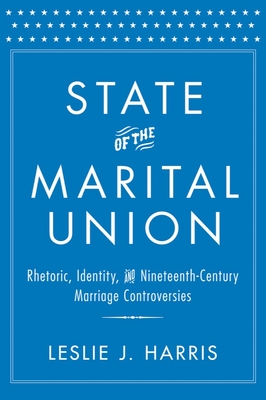 State of the Marital Union

State of the Marital Union documents the transformations of public identity occurring in American society through a close examination of the rhetoric used in nineteenth-century marriage controversies. Leslie J. Harris argues that American citizenship is, in part, rhetorically constituted through marriage.

The public debates over seemingly distinct marriage controversies, such as domestic violence, divorce, polygamy, free love, and interracial marriage, functioned as ways of both challenging and solidifying norms of gender, race, class, and ethnicity. Public sentiment operated as a lens for understanding some of the most heated public issues of the time, including slavery, westward expansion, women's rights, and immigration. Harris demonstrates how the private wife became the public woman by contesting legal standing in both the court of law and the court of public opinion.

State of the Marital Union makes the case that marriage is a critical site for constituting and performing ways of being in the American public, which has significant implications for understanding both female roles and the body politic.

Leslie J. Harris is Associate Professor of Communication at the University of Wisconsin, Milwaukee.
Loading...
or support indie stores by buying on