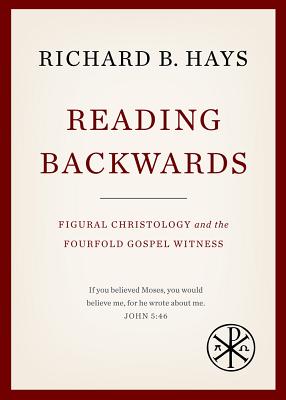 In Reading Backwards Richard B. Hays maps the shocking ways the four Gospel writers interpreted Israel's Scripture to craft their literary witnesses to the Church's one Christ. The Gospels' scriptural imagination discovered inside the long tradition of a resilient Jewish monotheism a novel and revolutionary Christology.

Modernity's incredulity toward the Christian faith partly rests upon the characterization of early Christian preaching as a tendentious misreading of the Hebrew Scriptures. Christianity, modernity claims, twisted the Bible they inherited to fit its message about a mythological divine Savior. The Gospels, for many modern critics, are thus more about Christian doctrine in the second and third century than they are about Jesus in the first.

Such Christian misreadings are not late or politically motivated developments within Christian thought. As Hays demonstrates, the claim that the events of Jesus' life, death, and resurrection took place according to the Scriptures stands at the very heart of the New Testament's earliest message. All four canonical Gospels declare that the Torah and the Prophets and the Psalms mysteriously prefigure Jesus. The author of the Fourth Gospel puts the claim succinctly: If you believed Moses, you would believe me, for he wrote about me (John 5:46).

Hays thus traces the reading strategies the Gospel writers employ to read backwards and to discover how the Old Testament figuratively discloses the astonishing paradoxical truth about Jesus' identity. Attention to Jewish and Old Testament roots of the Gospel narratives reveals that each of the four Evangelists, in their diverse portrayals, identify Jesus as the embodiment of the God of Israel. Hays also explores the hermeneutical challenges posed by attempting to follow the Evangelists as readers of Israel's Scripture--can the Evangelists teach us to read backwards along with them and to discern the same mystery they discovered in Israel's story?

In Reading Backwards Hays demonstrates that it was Israel's Scripture itself that taught the Gospel writers how to understand Jesus as the embodied presence of God, that this conversion of imagination occurred early in the development of Christian theology, and that the Gospel writers' revisionary figural readings of their Bible stand at the very center of Christianity.

--Joel B. Green, Dean of the School of Theology and Professor of New Testament Interpretation, Fuller Theological Seminary "First Things.

Richard B. Hays (Ph.D., Emory University) is George Washington Ivey Professor of New Testament, Duke Divinity School. His publications include Echoes of Scripture in the Gospels (2016), Reading the Bible Intertextually (edited with Stefan Alkier and Leroy A. Huizenga, 2009) and Revelation and the Politics of Apocalyptic Interpretation (edited with Stefan Alkier, 2012).
Loading...
or
Not Currently Available for Direct Purchase