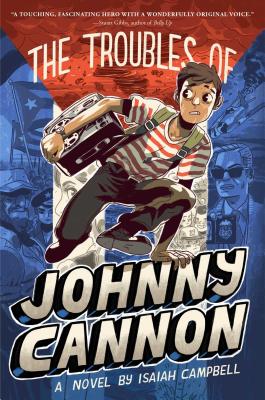 The Troubles of Johnny Cannon

“A boy with a highly original voice winces his way into the bewildering world of adults during a neglected moment in American history” (Newbery Medalist Richard Peck) in this heroic coming-of-age novel.

Johnny Cannon’s got problems. Money is scarce. Martha Macker, the girl he likes, barely knows he’s alive. His best friend Willie is pretty great, but he also happens to be a black kid—which is not exactly acceptable in Cullman, Alabama. His big brother Tommy went to war and vanished. His Pa may be committing treason in their backyard. And just when it seems like things couldn’t get worse, an old family friend—or maybe enemy—appears and shakes everything up. How’s a kid like Johnny supposed to get himself and his family out of a mess that’s stickier than molasses and twice as tangled as a spiderweb?

Praise For The Troubles of Johnny Cannon…

"A boy with a highly original voice winces his way into the bewildering world of adults during a neglected moment in American history."
— Richard Peck, author of the Newbery Medal-winning A Year Down Yonder

“The Troubles of Johnny Cannon is a gripping novel, filled with great characters and big ideas. Johnny Cannon is a touching, fascinating hero with a wonderfully original voice, and through him, Isaiah Campbell tells an engrossing tale set against the backdrop of both the Civil Rights movement and the Bay of Pigs Invasion. I don't wish any more troubles upon poor Johnny, but I wouldn't mind reading another few novels with him, either."
— Stuart Gibbs, author of Belly Up

"Isaiah Campbell has given us something special with The Troubles of Johnny Cannon—a story of humor, mystery, and heart, of courage and friendship and what it means to be family, all told in the unforgettable voice of Johnny Cannon himself—a hero you won’t soon forget. This is a book that made me laugh and think, and had me cheering for Johnny at every turn. An ambitious and exciting read."
— Claire Legrand

Isaiah Campbell was born and bred in Texas, and spent his childhood reading a blend of Dickens, Dumas, and Stan Lee. He dreamed his whole life of becoming a writer. And also of being bitten by a radioactive spider. Unfortunately, only one dream has panned out. For fifteen years he taught and coached students in writing and the arts before he finally took his own advice and wrote The Troubles of Johnny Cannon and The Struggles of Johnny Cannon. He lives in Philadelphia with his wife, three children, and his sanity, although that may be moving out soon. He occasionally searches the classifieds for the bulk sale of spiders and uranium but hasn’t had any luck yet. Find him online at IsaiahCampbell.com.
Loading...
or
Not Currently Available for Direct Purchase