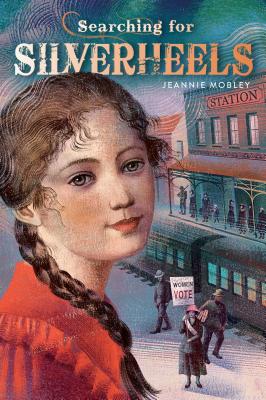 A starry-eyed girl and a gruff suffragette decipher the myth of a dancer-turned-local-hero in this gorgeous novel from the author of Katerina’s Wish that Kirkus Reviews called “an engrossing, plausible story of several unlikely feminist heroines with a touch of romance and intrigue.”

In her small Colorado town Pearl spends the summers helping her mother run the family café and entertaining tourists with the legend of Silverheels, a beautiful dancer who nursed miners through a smallpox epidemic in 1861 and then mysteriously disappeared. According to lore, the miners loved her so much they named their mountain after her.

Pearl believes the tale is true, but she is mocked by her neighbor, Josie, a suffragette campaigning for women’s right to vote. Josie says that Silverheels was a crook, not a savior, and she challenges Pearl to a bet: prove that Silverheels was the kindhearted angel of legend, or help Josie pass out the suffragist pamphlets that Pearl thinks drive away the tourists. Not to mention driving away handsome George Crawford.

As Pearl looks for the truth, darker forces are at work in her small town. The United States’s entry into World War I casts suspicion on German immigrants, and also on anyone who criticizes the president during wartime—including Josie. How do you choose what’s right when it could cost you everything you have?

Jeannie Mobley is an archaeologist and professor who lives in Colorado. Her first novel, Katerina’s Wish, received three starred reviews, won the Colorado Book Award, and was a New York Public Library 100 Titles for Reading and Sharing selection. She is also the author of Searching for Silverheels, which received a starred review. Visit her at JeannieMobley.com.

Praise For Searching for Silverheels…

"An engrossing, plausible story of several unlikely feminist heroines with a touch of romance and intrigue."
— Kirkus Reviews

"Readers follow Pearl in her quest to learn the truth about the dancer nicknamed Silverheels, and they see her shed her complacence for a determination to do right, no matter the cost. Mobley uses the microcosm of Como to echo the broader issues of the day—women’s suffrage, the Great War, prejudice, and class divisions—yet she doesn’t overwhelm readers or the town with these themes."
— School Library Journal

"While the story highlights several societal issues of the era, Pearl’s narrative includes them not as abstract ideas but as specific events rocking her small but gradually broadening world. From the author of Katerina’s Wish (2012), here’s another historical novel with a distinctive voice and an unusual setting."
— Booklist

"This is a well-written, compelling story that will have readers laughing out loud, empathizing with Pearl, and longing to know the true story of Silverheels."
— Library Media Connection
or
Not Currently Available for Direct Purchase
Copyright © 2020 American Booksellers Association