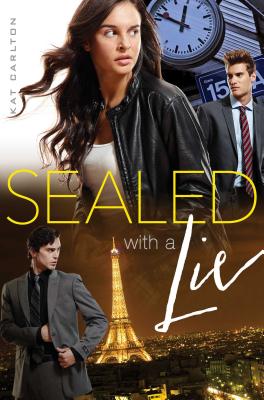 Sealed with a Lie

In this sequel to the romantic spy-thriller Two Lies and a Spy, Kari must race the clock on a mission to save her little brother.

Kari Andrews thought life was going to get easier. She was wrong. Following the events of Two Lies and a Spy, she and her brother, Charlie, are left to cope with the aftermath while also adapting to a new school—in another country. And then Charlie disappears.

With her brother’s life hanging in the balance, Kari, Evan, Rita, Kale, and some new friends from Generation Interpol (G.I.) are on a race around Europe at the bidding of a voice on a phone. The voice tells them that they need to jailbreak a thief—a flirtatious, hot thief—steal something from a high-security bio lab, and deliver the goods during what’s sure to be a double-cross exchange. Can they succeed before Charlie pays the ultimate price?

Praise For Sealed with a Lie…

"Carlton’s novel is solid; the story of a teenage spy-in-training is an interesting idea and is executed effectively. The lead character is a girl who is exceptionally strong, making her easy to identify with for both male and female readers. There is enough action and plenty of twists to keep the plot moving along at a swift pace"
— VOYA Magazine

Kat Carlton is the alias for a private citizen working in the interests of truth, justice, and the American Way. She’d reveal her true identity, but then she’d have to kill too many people…so Kat is content, like most covert operatives, to take names and kick ass from behind the scenes.
Loading...
or
Not Currently Available for Direct Purchase