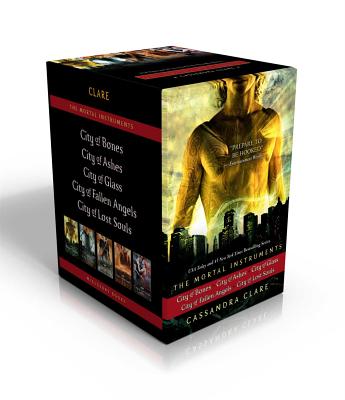 Enter the secret world of the Shadowhunters with this handsomely packaged boxed set that includes City of Bones, City of Ashes, City of Glass, City of Fallen Angels, and City of Lost Souls. The Mortal Instruments series has more than 20 million copies in print worldwide, and this collectible set of five hardcover volumes is a perfect gift for newcomers to the series and for loyal fans alike.

Cassandra Clare is the #1 New York Times and USA TODAY bestselling author of The Red Scrolls of Magic, Lady Midnight, Lord of Shadows, and Queen of Air and Darkness, as well as the internationally bestselling Mortal Instruments series and Infernal Devices trilogy. She is the coauthor of The Bane Chronicles with Sarah Rees Brennan and Maureen Johnson; Tales from the Shadowhunter Academy with Sarah Rees Brennan, Maureen Johnson, and Robin Wasserman; and Ghosts of the Shadow Market with Sarah Rees Brennan, Maureen Johnson, Kelly Link, and Robin Wasserman. Her books have more than 50 million copies in print worldwide and have been translated into more than thirty-five languages and made into a feature film and a TV show. Cassandra lives in western Massachusetts. Visit her at CassandraClare.com. Learn more about the world of the Shadowhunters at Shadowhunters.com.
or
Not Currently Available for Direct Purchase
Copyright © 2020 American Booksellers Association