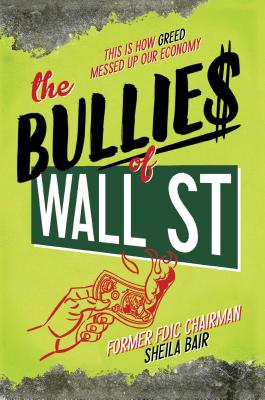 The Bullies of Wall Street

This Is How Greed Messed Up Our Economy

Can knowing how a financial crisis happened keep it from happening again? Sheila Bair, the former chairman of the FDIC, explains how the Great Recession impacted families on a personal level using language that everyone can understand.

In 2008, America went through a terrible financial crisis, and we are still suffering the consequences. Families lost their homes, had to give up their pets, and struggled to pay for food and medicine. Businesses didn’t have money to buy equipment or hire and pay workers. Millions of people lost their jobs and their life savings. More than 100,000 businesses went bankrupt.

As the former head of the Federal Deposit Insurance Corporation, Sheila Bair worked to protect families during the crisis and keep their bank deposits safe. In The Bullies of Wall Street, she describes the many ways in which a broken system led families into financial trouble, and also explains the decisions being made at the time by the most powerful people in the country—from CEOs of multinational banks, to heads of government regulatory committees—that led to the recession.

Praise For The Bullies of Wall Street: This Is How Greed Messed Up Our Economy…

“Readers are given keen insight into the link between banking and the economy. An excellent selection that puts a human face on the economic crisis.”

middle- and high-school level of understanding.

Sheila Bair is the former Chairman of the FDIC (Federal Deposit Insurance Corporation). She has been covered—and lauded—everywhere from The New Yorker to The Washington Post to The Wall Street Journal, and in 2008 and 2009 Forbes named her the second-most powerful woman in the world. Prior to assuming her post at the FDIC, Bair served as assistant secretary for financial institutions at the US Department of the Treasury and as senior vice president for government relations of the New York Stock Exchange.
or support indie stores by buying on