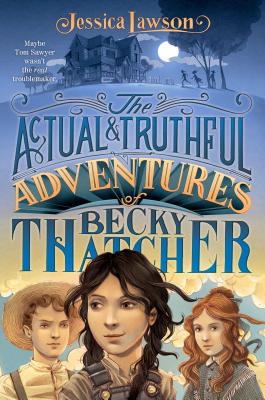 Becky Thatcher has her side of the story to tell—and it’s a whopper—in this creative spin on Mark Twain’s beloved The Adventures of Tom Sawyer, complete with illustrations.

Tom Sawyer’s and Huckleberry Finn’s adventures are legendary, but what about the story you haven’t heard? In 1860, eleven-year-old Becky Thatcher is the new girl in town, determined to have adventures like she promised her brother Jon before he died. With her Mama frozen in grief and her Daddy busy as town judge, Becky spends much of her time on her own, getting into mischief. Before long, she joins the boys at school in a bet to steal from the Widow Douglas, and Becky convinces her new best friend, Amy Lawrence, to join her.

But the theft doesn’t go as planned, and Widow Douglas ends up being unfairly accused of grave robbing as a result. So Becky concocts a plan to clear the Widow’s name. If she pulls it off, she might just get her Mama to notice her again, as well as fulfill her promise to Jon in a most unexpected way. That is, if that tattletale Tom Sawyer will quit following her around.

Praise For The Actual & Truthful Adventures of Becky Thatcher…

"The deliciously impetuous, devilishy clever, and uncommonly brave Becky Thatcher is now one of my all-time favorite heroines, and I'm desperate to follow her on more adventures. Captivating, exciting, and great barrels-full of fun, this is a book to adore."
— Anne Ursu, author of The Real Boy and Breadcrumbs

"[R]eaders not familiar with Twain's work will find an enjoyable adventure story with glimmers of mystery. Fans of historical fiction will enjoy the charming heroine and fitting affirmations of family, friendship, and remembrance."
— School Library Journal

"Young readers will race through this adventure, while teachers and adults will delight in its gold mine of creative parallels."
— BookPage

Jessica Lawson is the author of The Actual & Truthful Adventures of Becky Thatcher, a book that Publishers Weekly called “a delightfully clever debut” in a starred review, and Nooks & Crannies, a Junior Library Guild Selection and recipient of three starred reviews. She is also the author of Waiting for Augusta, Under the Bottle Bridge, and How to Save a Queendom. You can visit her at JessicaLawsonBooks.com.

Iacopo Bruno is an illustrator and graphic designer living in Milan, Italy.
or
Not Currently Available for Direct Purchase