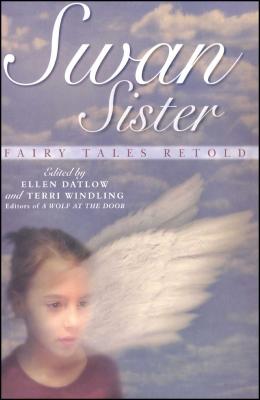 Just as fairy-tale magic can transform a loved one into a swan, the contributors to this book have transformed traditional fairy tales and legends into stories that are completely original, yet still tantalizingly familiar.
In this book you will find:
• a Rapunzel whose most confining prison is her loneliness
• a contemporary rendering of the Green Man myth
• two different versions of Red Riding Hood
• a tale that grew out of a Celtic folk song
• Sleeping Beauty's experience of her enchantment
• two works inspired by the Arabian Nights
• and more
In the follow-up to A Wolf at the Door, thirteen renowned authors come together with a selection of new and surprising adaptations of the fairy tales we think we know so well. These fresh takes on classic tales will show you sides of each story you never dreamed of.

Ellen Datlow has been editing sci-fi, fantasy, and horror short fiction for more than thirty years. She was fiction editor of Omni magazine and Scifiction and has edited more than fifty anthologies, including the annual Best Horror of the Year; Poe: 19 New Tales Inspired by Edgar Allan Poe; Darkness: Two Decades of Modern Horror; Lovecraft Unbound; Naked City: Tales of Urban Fantasy; Blood and Other Cravings; Supernatural Noir; Queen Victoria’s Book of Spells: An Anthology of Gaslamp Fantasy; and two YA anthologies: Teeth: Vampire Tales and After: Nineteen Stories of Apocalypse and Dystopia. She’s won nine World Fantasy Awards, plus multiple Locus, Hugo, Stoker, International Horror Guild, and Shirley Jackson Awards. She was the recipient of the 2007 Karl Edward Wagner Award, given at the British Fantasy Convention for outstanding contribution to the genre, and was honored with the Life Achievement Award given by the Horror Writers Association, in acknowledgment of superior achievement over an entire career.

Terri Windling has been a fiction editor for more than thirty years and has won many awards for her work. She has published more than forty anthologies (often in partnership with Ellen Datlow), as well as her own novels, children’s books, and nonfiction on fantasy, folklore, and mythic arts. She has won nine World Fantasy Awards, the Bram Stoker Award, and the SFWA Solstice Award for “outstanding contributions to the speculative fiction field as writer, editor, artist, educator, and mentor.” Her adult novel The Wood Wife won the Mythopoeic Award for Novel of the Year, her collection The Armless Maiden was shortlisted for the James Tiptree Jr. Award, and the YA anthology Teeth (co-edited with Ellen Datlow) was short-listed for the Shirley Jackson Award. A former New Yorker, Terri lives with her husband and daughter in a small country village in Devon, England.

“If there is a single person at the nexus of fantasy literature, it is Terri Windling—as writer, as painter, as editor, as muse.” —Jane Yolen
Loading...
or support indie stores by buying on