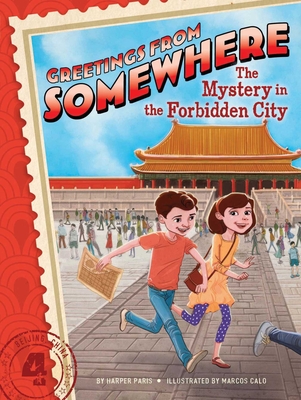 The Mystery in the Forbidden City (Greetings from Somewhere #4)

Ethan and Ella find an ancient map and explore a Chinese palace in the fourth book of Greetings from Somewhere, a chapter book series about mystery, travel, and adventure.

From the Great Wall to the dumplings, Ethan and Ella love China so far. And the Forbidden City in Beijing doesn’t leave anything to be desired, either! When the twins get separated from their parents, however, they get do some exploring on their own.

As they are wandering, the twins happen across an ancient-looking scroll that appears to have a map on it. Being the mystery-solving duo they are, Ethan and Ella attempt to navigate the map...but they get lost in the palace. There are thousands of rooms, and they all seem to look the same! Will the twins figure out where the map is leading them? And will they ever make their way out of the Forbidden City?

With easy-to-read language and illustrations on almost every page, the Greetings from Somewhere chapter books are perfect for beginning readers.

Harper Paris loves to travel. Her favorite cities in the world are Paris (like her name!) and New York City. She has collected many souvenirs on her travels, including a good-luck coin from Japan and a reindeer-horn pendant from Sweden. She also loves mysteries. When she was a kid, she read Hardy Boys and Nancy Drew books after bedtime with a flashlight. She now lives with her family (including two cats and a bunny, who are not good travelers) in Ithaca, New York.

Marcos Calo has worked as a professional artist for more than fourteen years. He has worked in different fields including illustration, animation, and comic books. He lives with his wife and daughter in A Coruña, a small Spanish town by the seaside.
Loading...
or support indie stores by buying on