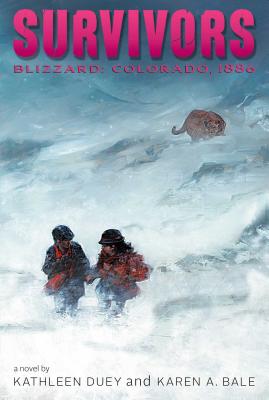 By Kathleen Duey, Karen A. Bale

A raging snow storm creates the coldest kind of danger for two kids in this riveting tale of historical fiction, part of the Survivor series.

Haydn Sinclair hates absolutely everything about his aunt and uncle’s primitive Rocky Mountain ranch. He’d much rather be in a great city than stuck on the countryside.

Haydn’s cousin Maggie hates the thought of having her rich and spoiled cousin visiting for four long months. She’d be happier if he wasn’t around.

When Maggie’s father is injured and she and Haydn are left alone, they argue, and Haydn sets off on foot for the train station miles away. The next day Maggie learns that Haydn never made it to town, and she must search for him despite the blizzard that is raging outside. But even if she can find him, will they be able to survive freezing nights, vicious winds, and the constant threat of snow slides?

Kathleen Duey’s works include the middle grade American Diaries and Survivors series, as well as the well-reviewed chapter book series The Unicorn’s Secret and its companion series, The Faeries’ Promise. She is also the National Book Award–nominated author of Skin Hunger. She lives in Fallbrook, California.

Karen A. Bale grew up in southern California and graduated from the University California Riverside. She has written seventeen historical romances, including the successful seven-book Sweet Medicine’s Prophecy series. She has done freelance work for several years, including helping to write two nonfiction books. Karen still resides in southern California, ten miles from the Pacific Ocean.
or
Buy Here
Copyright © 2020 American Booksellers Association