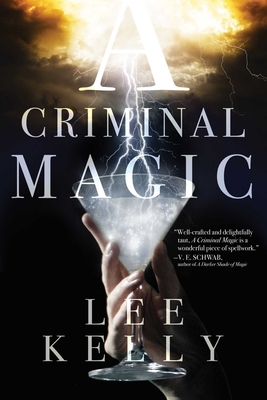 In Lee Kelly’s “electric” (Publishers Weekly) fantasy novel, two young sorcerers experiment with magic and mobsters in 1920s Prohibition when a new elixir is created that turns their lives upside down.

Washington, DC, 1926. Sorcery opponents have succeeded in passing the 18th Amendment, but the Prohibition of magic has only invigorated the city’s underworld. Smuggling rings carry magic contraband in from the coast. Sorcerers cast illusions to aid mobsters’ crime sprees. Gangs have even established “magic havens,” secret venues where the public can lose themselves in immersive magic and consume a mind-bending, highly addictive elixir known as “the sorcerer’s shine.”

Joan Kendrick, a young sorcerer from the backwoods of Norfolk County, accepts an offer to work for DC’s most notorious crime syndicate, The Shaw Gang, when her family’s home is repossessed. Alex Danfrey, first-year Federal Prohibition Unit trainee with a complicated past and talents of his own, becomes tapped to go undercover and infiltrate the Shaws. When Joan meets Alex at the Shaws’ magic haven, she discovers a confidante in her fellow partner and he begins to fall under her spell. But when a new breed of the addictive sorcerer’s shine is created within the walls of the magic haven, Joan and Alex are forced to question their allegiances as they become pitted against one another in a dangerous, heady game of cat-and-mouse.

Praise For A Criminal Magic…

"Reminiscent of The Night Circus with a splash of The Great Gatsby."
— Romantic Times

"Well-crafted and delightfully taut, A Criminal Magic is a wonderful piece of spellwork."
— V.E. Schwab, New York Times bestselling author of A Darker Shade of Magic

"A Criminal Magic is a smart, absorbing read, with a deft take on Prohibition, engaging characters, and an utterly believable and fantastic version of magic that is as splendid as it is dangerous."
— Kate Elliott, author of The Spiritwalker trilogy

"This is a solid, suspenseful, Prohibition-era crime story...a clever and very imaginative variant on a tried-and-true theme."
— Booklist

Lee Kelly is the author of A Criminal Magic and City of Savages. She has wanted to write since she was old enough to hold a pencil, but it wasn’t until she began studying for the California Bar Exam that she conveniently started putting pen to paper. An entertainment lawyer by trade, lee has practiced in Los Angeles and New York. She lives with her husband and son in Millburn, New Jersey. Follow her on at @LeeYKelly and on her website at NewWriteCity.com.
Loading...
or support indie stores by buying on