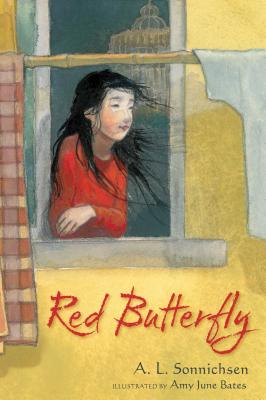 A young orphaned girl in modern-day China discovers the meaning of family in this “heartbreaking, heartwarming, and impressive debut” (Publishers Weekly, starred review) told in verse, in the tradition of Inside Out and Back Again and Sold.

Kara never met her birth mother. Abandoned as an infant, she was taken in by an American woman living in China. Now eleven, Kara spends most of her time in their apartment, wondering why she and Mama cannot leave the city of Tianjin and go live with Daddy in Montana. Mama tells Kara to be content with what she has…but what if Kara secretly wants more?

Told in lyrical, moving verse, Red Butterfly is the story of a girl learning to trust her own voice, discovering that love and family are limitless, and finding the wings she needs to reach new heights.

"Readers everywhere will empathize with and root for Kara as she discovers where she belongs and her true home."
— School Library Journal

"Sonnichsen’s sparse narrative in free verse moves Kara’s life along with deliberate sentiment, effort, and loyalty. Sympathetic readers will appreciate that Kara learns to build trust with those who demonstrate their compassion in constructive attempts to right some of the wrongs of her difficult beginnings."
— Booklist

"Both an individually compelling tale and an acknowledgment of the complexity of adoption..."
— The Children's Bulletin

"Red Butterfly is raw honesty interwoven with hope, as layered as life itself. This book deeply moved me."
— Carolyn Starr Rose, author of MAY B.

Amy June Bates has illustrated books including the Sam the Man series; Sweet Dreams and That’s What I’d Do, both by singer-songwriter Jewel; and Waiting for the Magic by Patricia MacLachlan. She is the author-illustrator of The Big Umbrella, which Booklist raved, “A boundlessly inclusive spirit...This open-ended picture book creates a natural springboard for discussion.” She lives in Carlisle, Pennsylvania, with her husband and three children.
Loading...
or support indie stores by buying on