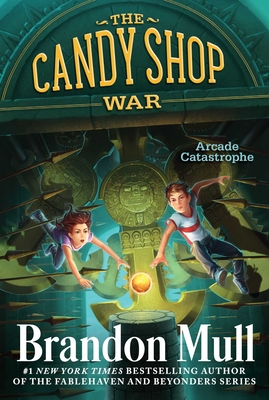 Arcadeland is full of magical secrets as well as fun and games in the second book in the Candy Shop War series, from the #1 New York Times bestselling author of the Beyonders and Fablehaven series.

Nate and his friends already know Mrs. White, the owner of the Sweet Tooth Ice Cream & Candy Shoppe, where the treats are magical in addition to delicious. And now they’re introduced to Mrs. White’s brother, Mr. White, who owns a local amusement center called Arcadeland. At Arcadeland, kids can play games and earn thousands of tickets that are redeemable for one of four kinds of stamps: jets, tanks, subs, and racecars. Could it be true that these stamps allow kids to fly through the air? Or breathe underwater? Or run faster than a car?

But Mr. White is hiding a secret: when all four stamp clubs are filled, he will be able to retrieve perhaps the most powerful talisman ever. For Nate and his friends, it will take more than candy to fight and win this war!