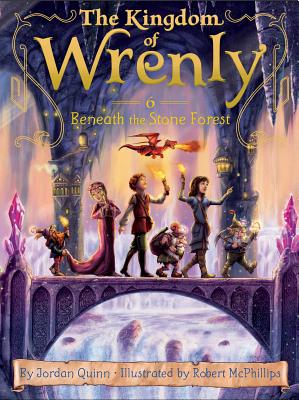 Beneath the Stone Forest (The Kingdom of Wrenly #6)

Prince Lucas and Clara explore the twisting tunnels beneath the Stone Forest in this sixth chapter book in the fantastical Kingdom of Wrenly series.

Clara invites Prince Lucas on her journey to map out the Stone Forest and visit the gnomes who live there. Unfortunately, Lucas has a visiting cousin who’s a royal pain and doesn’t want to get her hands dirty. But when Princess Bella’s puppy gets lost in the tunnels beneath the Stone Forest, she realizes that the subjects who make up a kingdom are just as important as their rulers.

Jordan Quinn grew up in a fairy tale castle in England. It had a spiral stone staircase, a moat, and a dungeon. As a child she liked to play hide-and-go-seek and ride her beloved horse, Prince Charming. When she wasn’t riding, she wrote stories about fairies, trolls, dragons, and wizards. Today, Jordan lives on a ranch in California with her husband, son, and a golden retriever named Sir Toots-a-Lot.

Robert McPhillips has been involved in a wide variety of projects over the years—from illustrating greeting cards to animation, though he especially loves illustrating children’s books. Robert makes his home in North Devon, England, with his wife, Sam.
Loading...
or support indie stores by buying on