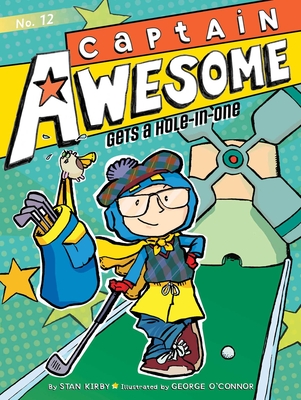 Captain Awesome Gets a Hole-in-One (Paperback)

Captain Awesome battles evil on the mini-golf course! Will the Sunnyview Superhero Squad be able to stop a cheater AND rescue a golf ball from a waterfall?

Eugene, Charlie, and Sally are going mini-golfing! But there’s a hitch. They're going mini-golfing for Meredith Mooney’s (aka Little Miss Stinky Pinky’s) birthday party. The Sunnyview Superhero Squad tries to make the best of the situation, but that situation turns sour when Meredith starts losing. Meredith does not like to lose—especially not to Eugene, who seems to be an awesome mini-golfer!

Meredith’s spirits pick up when she begins to win...and continues to win. But WAIT! Did Meredith just tap the ball into the hole with her foot when no one else was looking? Captain Awesome has discovered her secret and is about to reveal her, but first he must rescue a golf ball from a treacherous waterfall of doom!