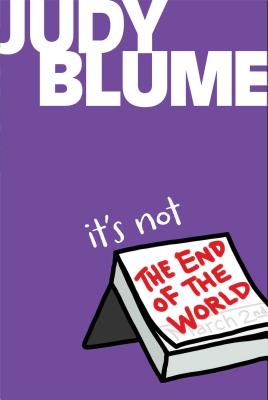 It's Not the End of the World (Hardcover)

Can Karen keep her parents from getting a divorce? This classic novel from Judy Blume has a fresh new look.

Karen couldn’t tell Mrs. Singer why she had to take her Viking diorama out of the sixth-grade showcase. She felt like yelling, “To keep my parents from getting divorced!” But she couldn’t say it, and the whole class was looking at her anyway.

Karen’s world was ending. Her father had moved out of the house weeks before; now he was going to Las Vegas to get divorced, and her mother was pleased! She had only a few days to get the two of them together in the same room. Maybe, if she could, they would just forget about the divorce. Then the Newman family could be its old self again—maybe. But Karen knew something she didn’t know last winter: that sometimes people who shouldn’t be apart are impossible together.

Judy Blume, one of America’s most popular authors, is the recipient of the 2004 National Book Foundation Medal for Distinguished Contribution to American Letters. She is the #1 New York Times bestselling author of beloved books for young people, including Are You There God? It’s Me, Margaret, and novels for adult readers, including Wifey, Smart Women, and Summer Sisters. Her work has been translated into thirty-two languages.Visit Judy at JudyBlume.com or follow her on Twitter at @JudyBlume.
or
Buy Here
Copyright © 2020 American Booksellers Association