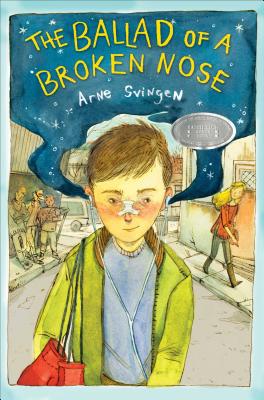 The Ballad of a Broken Nose

From award-winning Norwegian author Arne Svingen comes “an uplifting coming-of-age story” (The Wall Street Journal) about a relentlessly positive teenager who uses his love of opera to cope with his less-than-perfect home life.

Bart is an eternal optimist. At thirteen years old, he’s had a hard life. But Bart knows that things won’t get any better if you have a negative attitude. His mother has pushed him into boxing lessons so that Bart can protect himself, but Bart already has defense mechanisms: he is relentlessly positive…and he loves opera.

Listening to—and singing—opera is Bart’s greatest escape, but he’s too shy to share this with anyone. Then popular Ada befriends him and encourages him to perform at the school talent show. Ada can’t keep a secret to save her life, but Bart bonds with her anyway, and her openness helps him realize that his troubles are not burdens that he must bear alone.

The Ballad of a Broken Nose is a sweet story about bravery, fear, bullying, sports, and music. But most of all it is about the important days of your life, days when everything seems to happen at once and nothing will ever be the same again.

Praise For The Ballad of a Broken Nose…

"With deftness and subtlety, Svingen shows a boy hanging onto optimism in the face of adversity and asserting his identity when he’s long relied on obscuring himself fin the background."
— Publishers Weekly

"Bart's depth and the beauty he finds in his world are winning and moving. Lovely and profound. "
— Kirkus

"An absorbing, well-paced story with a heartening conclusion."
— Booklist

* "The novel is like a many-layered slice of cake: in every bite there's a mix of flavors, textures and mystery ingredients, adding up to a delicious read."
— Shelf Awareness, STARRED REVIEW

Arne Svingen is one of Norway’s most prominent writers for children and young adults. He has also written several novels for adults, radio plays for NRK, and graphic novels. The Ballad of a Broken Nose has been translated into eight other languages, and was awarded the Norwegian Ministry of Culture’s Best Young Adult Fiction Award.

Kari Dickson grew up in Edinburgh, Scotland, but spent most of her summers in Norway with grandparents who couldn’t speak English, so spoke Norwegian from an early age. She went on to Scandinavian Studies at UCL. While working in theatre in London, she was asked to do literal translations of two Ibsen plays, which fuelled her interest in Norwegian literature and led to an MA in Translation at the University of Surrey. Having worked initially as a commercial translator, including some years at the central bank of Norway, she now concentrates solely on literature. Her portfolio includes literary fiction, crime, non-fiction, and plays. Her translation of Roslund & Hellström’s Three Seconds won the CWA International Dagger in 2011. Kari currently teaches Norwegian language, literature and translation in the Scandinavian Studies department at the University of Edinburgh.
Loading...
or support indie stores by buying on