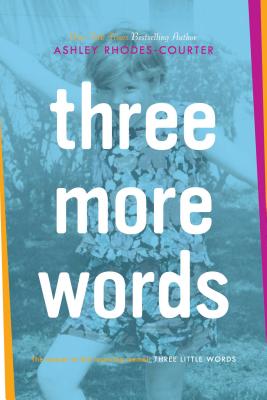 In the sequel to the New York Times bestselling memoir Three Little Words, Ashley Rhodes-Courter expands on life beyond the foster care system, the joys and heartbreak with the family she’s created, and her efforts to make peace with her past.

Ashley Rhodes-Courter spent a harrowing nine years of her life in fourteen different foster homes. Her memoir, Three Little Words, captivated audiences everywhere and went on to become a New York Times bestseller. Now Ashley reveals the nuances of life after foster care: College and its assorted hijinks, including meeting “the one.” Marriage, which began with a beautiful wedding on a boat that was almost hijacked (literally) by some biological family members. Having kids—from fostering children and the heartbreak of watching them return to destructive environments, to the miraculous joy of blending biological and adopted offspring.

Whether she’s overcoming self-image issues, responding to calls asking for her to run for Senate, or dealing with continuing drama from her biological family, Ashley Rhodes-Courter never fails to impress or inspire with her authentic voice and uplifting message of hope.

Ashley Rhodes-Courter has been featured in Teen People, The New York Times, USA TODAY, and Glamour, as well as on Good Morning America. Her first memoir, Three Little Words, began as an essay, which won a writing contest for high school students, and was published in The New York Times Magazine. She is also the author of Three More Words. A graduate of Eckerd College and a champion for the reformation of the foster care system, Ashley speaks internationally on foster care and adoption. Visit her at Rhodes-Courter.com.
Loading...
or support indie stores by buying on