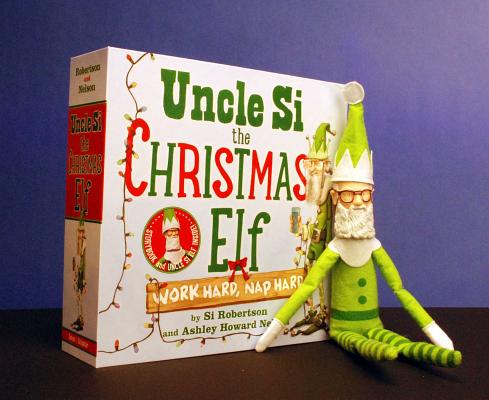 Duck the halls! This book and doll set starring Uncle Si of Duck Dynasty® captures the true message of Christmas and makes for a perfect present—to either give or receive!

Uncle Si plays the part of an elf in order to help Santa Claus to save one little boy’s Christmas. This humorous, heartwarming picture book is told in verse that’s true to Uncle Si’s unique way of spinning a tale. And kids will love displaying their doll of Uncle Si, the Christmas elf—who is dressed in his own special elf costume!

Si Robertson, one of the stars of A&E’s Duck Dynasty, has worked and hunted for Duck Commander since retiring from the United States Army in 1993. Before he became America’s favorite uncle through his appearances on Duck Dynasty, Si spent his time making all the reeds for the Duck Commander calls and working with Phil to prepare for the next duck season. Now he spends most of his time filming and traveling around the country doing events. But no matter how busy his life gets, he always makes time to sit in the blind with his buddies and hunt. Si lives in West Monroe, Louisiana, with his wife Christine. They have two grown children, Trassa and Scott, and eight grandsons.

Ashley Howard Nelson holds a BS in health and human performance from the University of Louisiana at Monroe. She is the coauthor, along with her sister, Korie Robertson, of the inspirational gift book Hugs to Brighten Your Day. Originally from West Monroe, Louisiana, she and her husband, Jay, have ventures together in the travel, real estate, lawn care, and music industries and live with their five children in Madison, Alabama; and Nashville, Tennesee.

Stephen Gilpin graduated from the NYC School of Visual Arts where he studied painting and cartooning. He is the illustrator of the Who Shrunk Daniel Funk series and The Extraordinary Adventures of Ordinary Boy series. Stephen currently lives in Hiawatha, Kansas. Visit him at SGilpin.com.
or support indie stores by buying on
Copyright © 2020 American Booksellers Association