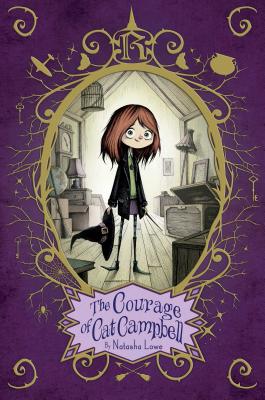 Cat Campbell is a late-blooming witch whose magical abilities have yet to be mastered in this charming coming-of-age story set in the world of The Power of Poppy Pendle.

Cat Campbell has had magical powers since the day she was born, but she didn’t always know that. Cat’s mother believes magic ruins lives, and even as Cat’s passion for magic grows over the years, no one suspects she has the gift. But she has indeed inherited the coveted magic gene of her famed great-great-grandmother Mabel, a discovery she makes in a most surprising way. And when she comes across a book called The Late Bloomer’s Guide to Magic, she finds the encouragement she needs and spells that actually work. Then the town of Potts Bottom is threatened by a notoriously feared witch, and Cat has the chance to help her family and town—and to prove herself in the process. Because, as The Late Bloomer’s Guide to Magic proclaims, “believing in your magic and yourself is half the battle.”

Praise For The Courage of Cat Campbell (Poppy Pendle)…

Since the day she was born, Cat has wanted nothing more than to be a witch and study at the exclusive Ruthersfield Academy. Sadly, she shows no signs of having been born with the gift, and, crushingly, her mother, Poppy, is a talented witch who refuses to even discuss magic. In this charming sequel to The Power of Poppy Pendle (2012), Poppy has grown up and runs her own successful bakery. When a run-in with a spider activates a recessive magic gene in 11-year-old Cat, she is given a copy of The Late Bloomer’s Guide to Magic and tries to live by its advice—“don’t let fear stand in your way”—as she fights with her mother to be allowed to attend the academy, conquers her fear of spiders, and finds herself face to face with a notoriously evil witch who has escaped prison. Fans of the first novel will delight in this gentle, affirming fantasy, which is as focused on Poppy and Cat’s relationship as it is on Cat’s magical quest. Recipes from The Late Bloomer’s Guide are included.
— Booklist Online

Lowe's simple plot of parent-child conflict unfolds in a now-familiar wizarding world, tension arising more from emotions than external thrills, despite that wicked witch. The appended recipes include incantations and substitutions if readers are unable to find pixie laughs or unicorn milk at the local grocery. A sweet choice for readers who prefer their fantasy thoughtful instead of action-packed.
— Kirkus Reviews

Lowe’s charming addition to the world of Potts Bottom follows Cat’s determined progress toward her goal, showing her failures and triumphs in a realistic arc. The author’s treatment of the mother-daughter relationship smoothly blends whimsical fantasy elements with scenes that readers will recognize from their own family squabbles. Cat’s adventures in courage give new treatment to the familiar idea that parents want their children to avoid making their own mistakes. To this, Lowe adds some truly laugh-out-loud moments between Cat and her friend Peter. The book concludes with “magical” recipes to bake at home. Stock both of Lowe’s novels at your library: fans of Matilda or Alice Miranda will be happy to meet another spunky girl.–Caitlin Augusta, Stratford Library Association, CT
— School Library Journal

Fans of the first novel will delight in this gentle, affirming fantasy, which is as focused on Poppy and Cat’s relationship as it is on Cat’s magical quest.
— Booklist Online

Lowe echoes the whimsy of J.K. Rowling and Anna Dale with vibrant descriptions ("A burst of pink smoke covered the table, with showers of green sparkles shooting out like fireworks"), a cozy atmosphere (several "magical" recipes are included), and charismatic characters.
— Publishers Weekly

Cat may have been born to do magic, but she seems to not have inherited any magical ability. Her mother, Poppy, is deeply relieved, given her own disastrous history with spells (Poppy was the child protagonist of the captivating The Power of Poppy Pendle). Cat can’t accept her own normalcy, though, and it turns out she’s right: a moment with one of her greatest fears, spiders, seems to shake magic out of her. Terror-elicited powers are known to be extremely hard to tame, however, and Cat’s so eager to try them out that she doesn’t wait for proper training, turning her best friend into an animal and causing other disasters. There are no true villains this novel, just misunderstood people pushed beyond their reasonable tolerance into reaction. This nuance is warmly conveyed, and the characters are therefore all compelling, whether “bad” witch or plucky heroine; all of them mess up and all of them have the capacity to try to right their wrongs. Clever end materials offer recipes (all of which would produce yummy products, even without, for example, a griffin’s tooth), simple spells, and advice to late-blooming witches. Fans of the earlier novel will rejoice in seeing how Poppy has managed to fulfill her own dreams, and they’ll appreciate the headstrong daughter that she has raised, a realistic offspring given Poppy’s own irascible, determined personality. AS
— Bulletin