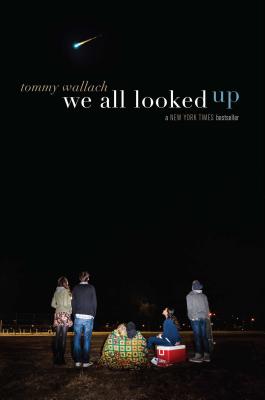 We All Looked Up

They always say that high school is the best time of your life.

Peter, the star basketball player at his school, is worried “they” might actually be right. Meanwhile Eliza can’t wait to escape Seattle—and her reputation—and perfect-on-paper Anita wonders if admission to Princeton is worth the price of abandoning her real dreams. Andy, for his part, doesn’t understand all the fuss about college and career—the future can wait.

Or can it? Because it turns out the future is hurtling through space with the potential to wipe out life on Earth. As these four seniors—along with the rest of the planet—wait to see what damage an asteroid will cause, they must abandon all thoughts of the future and decide how they’re going to spend what remains of the present.

Praise For We All Looked Up…

*“In this stunning debut...Wallach pierces his darkness with tenderness and humor. A thought-provoking story that will bring out readers' inner philosophers.”
— Kirkus Reviews, STARRED REVIEW

“Tommy Wallach's We All Looked Up is a triumphant debut—this generation's The Stand. It is at once troubling, uplifting, scary, and heart-wrenching, and written with so much compassion for our fragile hold on the fleeting here and now. A glorious, wonderful, completely unforgettable novel.”
— Andrew Smith, author of Winger, Grasshopper Jungle, and 100 Sideways Miles

“The story twists in unexpected ways, making it at times chilling but also hopeful...Wallach’s debut is...a literary Breakfast Club for a modern generation, and it will surprise readers expecting another clunky dystopian novel with its solid, realistic writing.”
— Booklist

“This compelling, well-written narrative, which offers sometimes raw insight into human motivation and behavior, will have readers racing to the final pages and pondering its ideas long after.”
— VOYA, STARRED REVIEW

"Debut novelist Wallach increases the tension among characters throughout, ending in a shocking climax that resonates with religious symbolism."
— Publishers Weekly, STARRED REVIEW

"It’s a dark novel, particularly as things fall apart and stop working (many people abandon even important posts to be with their loved ones), but Wallach uses black humor, sharp literary references (Vonnegut gets some attention, for example), and startlingly beautiful moments of true kindness to balance the dismal aspects."
— The Children's Bulletin

Tommy Wallach is the author of the Anchor & Sophia trilogy, Thanks for the Trouble, and the New York Times bestselling We All Looked Up, which has been translated into over a dozen languages. His writing has appeared in McSweeney’s, Tin House, Wired, and other magazines, and he is a MacDowell Fellow. He was signed to Decca Records as a singer-songwriter, and has independently released two full-length albums, including We All Looked Up: The Album, a companion record to his first novel. He currently lives in Los Angeles, where he recently opened up his first escape room, and is working on bringing his novels to various sorts of screens. Grok more at TommyWallach.com.
Loading...
or support indie stores by buying on