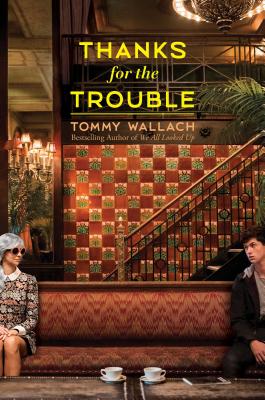 Thanks for the Trouble

Tommy Wallach, the New York Times bestselling author of the “stunning debut” (Kirkus Reviews, starred review) We All Looked Up, delivers a brilliant new novel about a young man who overcomes a crippling loss and finds the courage to live after meeting an enigmatic girl.

“Was this story written about me?”
I shrugged.
“Yes or no?”
I shrugged again, finally earning a little scowl, which somehow made the girl even more pretty.
“It’s very rude not to answer simple questions,” she said.
I gestured for my journal, but she still wouldn’t give it to me. So I took out my pen and wrote on my palm.
I can’t, I wrote. Then, in tiny letters below it: Now don’t you feel like a jerk?

Parker Santé hasn’t spoken a word in five years. While his classmates plan for bright futures, he skips school to hang out in hotels, killing time by watching the guests. But when he meets a silver-haired girl named Zelda Toth, a girl who claims to be quite a bit older than she looks, he’ll discover there just might be a few things left worth living for.

From the celebrated author of We All Looked Up comes a unique story of first and last loves.

Praise For Thanks for the Trouble…

"Wallach (author of We All Looked Up) delivers well-rounded, witty characters—all contemplating whether living a full life is better than living a long one. Bittersweet moments intersect with the intricate fairy tales Parker writes, compelling readers to judge what is real and what is make-believe."
— Publishers Weekly, STARRED REVIEW

"An absorbing coming-of-age narrative about the power of connection."
— Kirkus Reviews, STARRED REVIEW

“A unique and compelling tale. The narrator’s hilariously crass but poignant voice is sure to intrigue even the most reluctant of readers.”
— School Library Journal, STARRED REVIEW

“This novel is a good read-alike for John Green fans.”
— VOYA

"Readers looking for a beautifully written philosophical romance will enjoy losing themselves in this one."
— The Bulletin of the Center for Children’s Books

"Jaded young readers and romantics alike will fall hard for Tommy Wallach's (author of We All Looked Up) underachieving writer of fairy tales and out-of-time wise woman as they tumble through a delirious three days of skinny dipping, drinking Champagne in a limo and rampant philosophizing. Cleverly but unobtrusively framed as a college application essay, Thanks for the Trouble plays with love, hubris and the youthful belief that more is always better."
— Shelf Awareness

Tommy Wallach is the author of the Anchor & Sophia trilogy, Thanks for the Trouble, and the New York Times bestselling We All Looked Up, which has been translated into over a dozen languages. His writing has appeared in McSweeney’s, Tin House, Wired, and other magazines, and he is a MacDowell Fellow. He was signed to Decca Records as a singer-songwriter, and has independently released two full-length albums, including We All Looked Up: The Album, a companion record to his first novel. He currently lives in Los Angeles, where he recently opened up his first escape room, and is working on bringing his novels to various sorts of screens. Grok more at TommyWallach.com.
Loading...
or
Not Currently Available for Direct Purchase