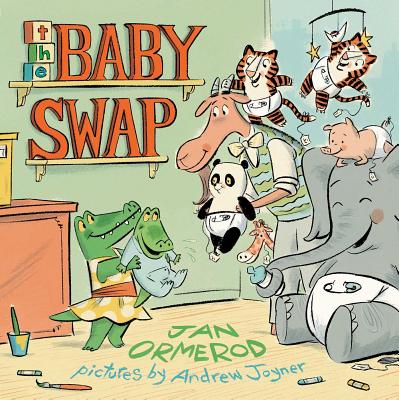 Caroline Crocodile is not thrilled with her baby brother. He drools. A lot. But all Mama Crocodile ever says is how GORGEOUS he is! And so Caroline ventures into a baby shop to swap out her brother. Unfortunately, the baby panda is a fussy eater, the giraffe is missing scales, and the piglet isn’t green. Turns out, the best younger sibling around might just be her own yellow-eyed, sharp-clawed, drooling baby brother.

Jan Ormerod (1946–2013) was an award-winning author who grew up in Western Australia. As a child Jan drew constantly, and she eventually went on to attend art school and study drawing, painting, and sculpture. During her career Jan published more than fifty books, including Sunshine, Lizzie Nonsense, Water Witcher, and Maudie and Bear. Her work, which resonated with young children and adults alike, won many prestigious awards and received much acclaim.

Andrew Joyner is an Australian illustrator and cartoonist. The first picture book that he illustrated, The Terrible Plop, was published in 2009. Soon after Andrew created his own book series based on Boris, an adventurous warthog. In addition to his children’s book projects, he also illustrates regularly for newspapers and magazines. Andrew lives in Strathalbyn, South Australia, with his family and nineteen pets.
or support indie stores by buying on
Copyright © 2020 American Booksellers Association