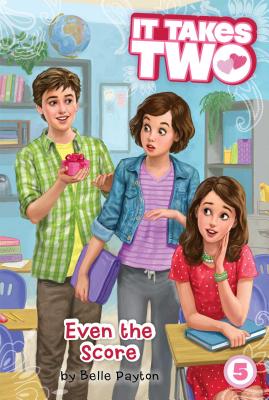 Alex makes an unpopular decision and Ava deals with an unwanted crush in the fifth book of the It Takes Two series!

Sporty, shy Ava is finally starting to feel like the guys on the Ashland Middle School football team are accepting her as a player, despite the fact that she’s a girl. But then the star wide receiver, Owen, keeps missing his passes, and his teammates are blaming it on a crush—on Ava! When he awkwardly gives Ava a gift that’s way too expensive, she realizes they’re right. Can she find a way to let Owen down easy and still stay on the team’s good side?

Meanwhile, class president Alex has to choose how to spend some student council funds. The football team is scheduled to get a new scoreboard, but the drama department desperately needs new sets and costumes. Alex decides it’s fair to give some money to the arts for a change, but the football fans of Ashland don’t necessarily think so…and it may take a natural disaster for Alex to prove she’s not a football-hater!

Praise For Even the Score (It Takes Two #5)…

For A Whole New Ball Game:
"The twin device is effectively deployed as each girl seeks to understand herself independently, in relation to her twin, and in the context of her new town; there's also appeal in the plot's sitcom elements of overheard conversations, secret observations, and all the uncertainty that comes with being a new place."

Belle Payton isn’t a twin herself, but she does have twin brothers! She spent much of her childhood in the bleachers reading—er, cheering them on—at their football games. Though she left the South long ago to become a children’s book editor in New York City, Belle still drinks approximately a gallon of sweet tea a week and loves treating her friends to her famous homemade mac-and-cheese. Belle is the author of many books for children and tweens, and is currently having a blast writing two sides to each It Takes Two story.
or
Not Currently Available for Direct Purchase