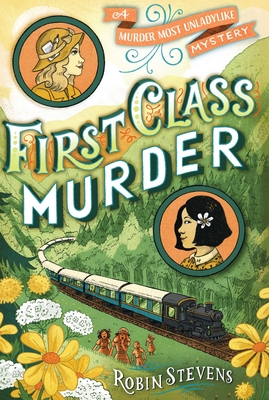 A murdered heiress, a missing necklace, and a train full of shifty, unusual, and suspicious characters leaves Daisy and Hazel with a new mystery to solve in this third novel of the Wells & Wong Mystery series.

Hazel Wong and Daisy Wells are taking a vacation across Europe on world-famous passenger train, the Orient Express—and it’s clear that each of their fellow first-class travelers has something to hide. Even more intriguing: There’s rumor of a spy in their midst.

Then, during dinner, a bloodcurdling scream comes from inside one of the cabins. When the door is broken down, a passenger is found murdered—her stunning ruby necklace gone. But the killer has vanished, as if into thin air.

The Wells & Wong Detective Society is ready to crack the case—but this time, they’ve got competition.

Praise For First Class Murder (A Murder Most Unladylike Mystery)…

"[A] more than credible take on the Agatha Christie original. . . . both [a] solid mystery and delightful romp."
— Booklist Online

PRAISE FOR MURDER IS BAD MANNERS

"Reading Murder Is Bad Manners is like drinking cocoa by a fireside: It is warm and witty and deeply satisfying."
— Katherine Rundell, author of Rooftoppers and Cartwheeling in Thunderstorms

Robin Stevens was born in California and grew up in Oxford, England, across the road from the house where Alice of Alice in Wonderland lived. Robin has been making up stories all her life. She spent her teenage years at boarding school, reading a lot of murder mysteries and hoping that she’d get the chance to do some detecting herself (she didn’t). She studied crime fiction in college and then worked in children’s publishing. Robin now lives in England with her pet bearded dragon, Watson.
Loading...
or support indie stores by buying on