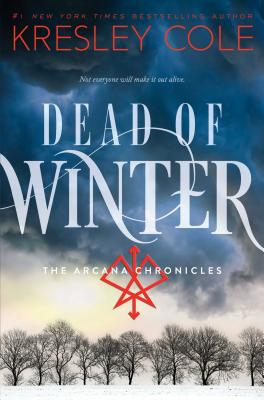 Dead of Winter (The Arcana Chronicles)

Can Evie convince her rival loves to work together? Their survival depends on it in this third book of #1 New York Times bestselling author Kresley Cole’s Arcana Chronicles, a nonstop action tale of rescue, redemption, and a revenge most wicked.

Heartbreaking decisions
Evie was almost seduced by the life of comfort that Death offered her—until Jack was threatened by two of the most horrific Arcana, The Lovers. She will do anything to save him, even escape Death’s uncanny prison, full of beautiful objects, material comforts…and stolen glances from a former love.

Uncertain victory
Despite leaving a part of her heart behind with Death, Evie sets out into a frozen and perilous post-apocalyptic wasteland to meet up with her allies and launch an attack on The Lovers and the vast army they command. Such formidable enemies require a battle plan, and the only way to kill them once and for all may mean Evie, Jack, and Death allying. Evie doesn’t know what will prove more impossible: surviving slavers, plague, Bagmen and other Arcana—or convincing Jack and Death to work together.

Two heroes returned
There’s a thin line between love and hate, and Evie just doesn’t know where she stands with either Jack or Death. Will this unlikely trio be able to defeat The Lovers without killing one another first?

Praise For Dead of Winter (The Arcana Chronicles)…

"A juicy cliff-hanger ending will amp up their appetites for further tarot-based adventures."
— Booklist

A mash-up of supernatural romnance, Tarot mysticism, horror, and a dash of dystopia, this is a melodramatic gumbo that will divide teen readers into Team Jack or Team Death....Fans of the previous two books will be ravenous to get their hands on this latest installment.
— School Library Journal

Gory at times and touched with humor, this engaging entry in the Arcana Chronicles gallops between postapocalyptic chase and rescue scenes while also occasionally pausing to explore the dual nature of love.... Read Poison Princess (2012) and Endless Knight (2013) first, and prepare yourself for a zinger of a cliff-hanger!
— Booklist Online