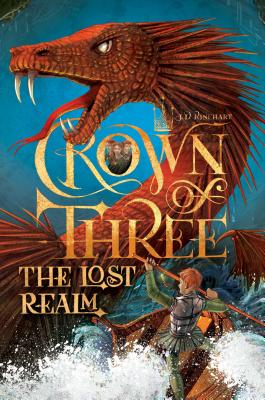 The Lost Realm (Crown of Three #2)

Family secrets combine with fantasy in this epic tale of battle, magic, strange creatures, power, and fate, in a sweeping new middle grade series that Publishers Weekly called “Game of Thrones on a mellow day.”

The kingdom of Toronia is being torn apart by civil war. The kingdom’s only hope comes in the form of illegitimate triplets, who are prophesied to kill the king and rule together in peace. Separated at birth and scattered throughout the realms, the triplets face a desperate fight to secure their destiny. Will they survive long enough to rule?

The resurrected King Brutan and his army of the dead control the city of Idilliam. Outside, Eloide and Tarlan are trying to hold their own army together and find a way to rescue their brother Gulph who is trapped inside the city. Or is he? Gulph has found a passageway to the lost realm of Celestis, which lies beneath Idilliam. There he is reunited with the mother he has never known—but she can’t remember him. If Gulph stays in the city, will he also forget those above ground whom he loves?

Meanwhile, Tarlan and the wizard Melchior set out on a quest to restore the wizard’s powers, leaving Eloide and her army to keep watch. But Eloide is betrayed, her troops slaughtered, and she is taken captive by Lord Vicerin, her former guardian, who is determined to use her to get to the throne.

Seemingly further from the throne than ever, the triplets will need to use all of their strength and abilities if they are to survive—let alone rule.

Praise For The Lost Realm (Crown of Three #2)…

"In this action-packed debut, triplets born to an evil king are spirited away at birth so they will survive tofulfill the prophesy that they will overthrow their father and rule the kingdom. . . the ending races to a rousing finish in preparation for the sequel."
— Booklist on Crown of Three (Book 1)