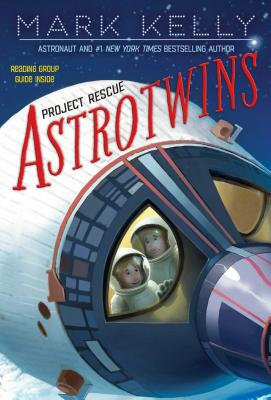 Twins Mark and Scott discover an abandoned Apollo command module and take off to rescue a stranded Russian cosmonaut in the second Astrotwins adventure from retired NASA astronaut and the #1 New York Times bestselling author of Mousetronaut, Mark Kelly.

Mark and Scott Kelly, who are mostly known for getting into trouble, are finally back from their first space adventure. The twins have wanted to explore space ever since they were little and watched Neil Armstrong walk on the moon. And when they hear that a Russian cosmonaut is trapped inside the Salyut space station now orbiting 220 miles above the surface of the Earth, they wish they could find a way to help.

While staying in the countryside at their grandfather’s house with their friend Jenny (aka Egg), the twins repurpose a NASA Titan 2 rocket ship being stored nearby. Complete with spacesuits and snacks, the twins take off on their rescue mission. Will they ever see their family or their grandfather’s backyard again?

Written by a NASA astronaut with four space flights under his belt, the second exciting Astrotwins story includes extensive back matter on the space program with fantastic facts and details.

Mark Kelly is a retired astronaut and US Navy Captain. His picture book Mousetronaut, illustrated by C. F. Payne was a #1 New York Times bestseller. He flew his first of four missions in 2001 aboard Space Shuttle Endeavour, the same space shuttle that he commanded on its final flight in May 2011. In 2020 he will be running to represent Arizona in the United States Senate.

Martha Freeman worked as a reporter and teacher before becoming a full-time writer of books for young readers, including the Edgar Award­–nominated Zap!, Born Curious, The Secret Cookie Club series, Who Stole Halloween?, and Effie Starr Zook Has One More Question, which School Library Journal called “accessible and exciting” in a starred review. She also collaborated with NASA astronaut Mark Kelly on the Astrotwins books. Martha lives in Colorado. Learn more at MarthaFreeman.com.
Loading...
or support indie stores by buying on