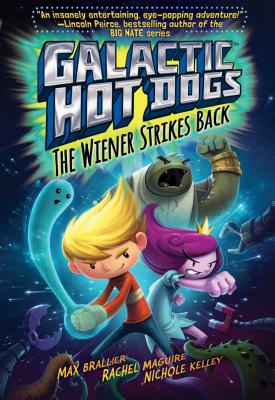 The Wiener Strikes Back

Cosmoe, Princess Dagger, Humphree, and the gang are back for another wild space adventure in the second hilarious illustrated novel of the Galactic Hot Dogs series, which Lincoln Peirce calls an “an insanely entertaining, eye-popping adventure.”

What could go better with wieners than a flying space circus? Nothing! Which is why Humphree’s all jazzed up at the chance to sell Galactic Hot Dogs as the official food of Crostini’s Cosmic Carnival and Wonder Circus train. Cosmoe’s not entirely convinced—but once his skills as a monster tamer are unveiled, the deal is done and the Neon Wiener is officially hooked onto the train.

Only things aren’t quite what they seem at this circus, and pretty soon Cosmoe realizes he and his buddies are in more danger than ever. To get to the bottom of it all, they have to travel somewhere pretty familiar, providing a glimpse at last into Cosmoe’s past and how he ended up aboard the Wiener in the first place.

Praise For Galactic Hot Dogs 2: The Wiener Strikes Back…

Theproprietors of Galactic Hot Dogs return for more evil-bashing high jinks aboardthe Neon Weiner. Earth boy Cosmoe, his ginormous, ex-space-pirate buddy,Humphree, and their half-evil erstwhile kidnapper, Princess Dagger, are havinga great time hanging out and hawkin' hot dogs on the desert planet Arahas…butthey aren't making much moolah. Then Crostini's Cosmic Carnival and WonderCircus comes to Arahas. Animal-loving Cosmoe hates circuses, but his twofriends talk him in to attending. After a humungous Skorlax attacks the circustent and Cosmoe shows rare monster-taming talents, Crostini invites the trio tojoin the circus and sell their wares at each stop…Cosmoe can join the show too.Of course, that doesn't last for one performance (hey, the story has to movealong if there are gonna be enough explosions). Crostini's working on an evilarmy for Evil Queen Dagger (the princess's mom). Can Cosmoe and his friendsstop this nefarious plot? Brallier and Maguire bring their webcomic (now with ahome full of games and activities and videos at Funbrain.com andPoptropica.com) back for a second venturesome print volume with collaboratorKelley. Jagged comic panes and captioned illustrations, some full-page, propelthe story and add to the laffs. Final art not seen. Total fluff, often makingnot a lick of sense (in a good way), this will satisfy the appetites of fans ofthe first—but reading that first is a must (or there will be fewer licks ofsense). (Graphic/science-fiction hybrid. 7-10)
— Kirkus Reviews

The crew of the interstellar hot dog stand Neon Wiener return, ready to foil another one of evil Queen Dagger’s dastardly schemes. This epic, heavily illustrated follow-up to Cosmoe’s Weiner Getaway (2015) has just as many heroic feats, narrow squeaks, mighty explosions, monster fights, and crude jokes as the first adventure. Dashingly coiffured Earth boy Cosmoe, his two alien sidekicks, and Princess Dagger, the semievil daughter of the aforementioned queen, literally hitch their wagon to a traveling circus that turns out to be capturing aliens to create an army of mind-controlled monsters. Time to, as Cosmoe puts it, “STOP THE BAD DUDES AND SAVE THE DAY!” Readers of the Galactic Hot Dogs webcomic, from which the series is spun, will know they are in for quite a romp. — John Peters
— Booklist

"Readers of “Diary of a Wimpy Kid” and those still obsessed with all things Star Wars will enjoy this silly romp through space."
— School Library Journal

Max Brallier is the New York Times, USA TODAY, and Wall Street Journal bestselling author of more than thirty books for children and adults. His books and series include The Last Kids on Earth, Eerie Elementary, Mister Shivers, Galactic Hot Dogs, and Can YOU Survive the Zombie Apocalypse? Max lives in New York City with his wife and daughter. Follow Max on Twitter @MaxBrallier or visit him at MaxBrallier.com.

Rachel Maguire is an award-winning illustrator and animator. She teaches comics to children and lives in Massachusetts with her husband, Jon, and her cat, Becky.

Nichole Kelley does not like to define herself as any specific kind of artist. In the past she has worked professionally as an animator, illustrator, and designer. This combination has allowed her to work on a variety of awesome projects, including web animation, casual games, console games, board games, and children’s illustration. In her free time, she enjoys video games, board games, toys, crafting of all sorts, and sleeping. Her latest venture is learning how to make glass beads and marbles.