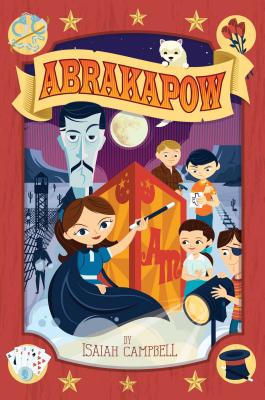 Based on a true World War II story, Isaiah Campbell tells a charming mystery about a mishap at a magic show at a POW camp—featuring magic how-to diagrams throughout.

Try as she might, cheeky middle schooler Maxine Larousse (you may call her Max “La Roo” or The Amazing Max, if you’d like) has yet to learn the one magic trick she needs the most: how to reappear in New York City. That is where she used to live with her parents before her father, Major Larousse, was put in charge of a Nazi POW camp in Abilene, Texas. At least in this desolate wasteland she’ll have plenty of time to practice her illusions, even if the only audience member is her ferret Houdini.

When she’s tasked with entertaining the Nazi prisoners with a magic show, the pressure may be too much. But with the help of some classmates and an unexpected magic expert, the performance is a hit—until twelve Nazis escape during her final act. Will she be able to track them down before her reputation as a magician is destroyed forever?

Isaiah Campbell was born and bred in Texas, and spent his childhood reading a blend of Dickens, Dumas, and Stan Lee. He dreamed his whole life of becoming a writer. And also of being bitten by a radioactive spider. Unfortunately, only one dream has panned out. For fifteen years he taught and coached students in writing and the arts before he finally took his own advice and wrote The Troubles of Johnny Cannon and The Struggles of Johnny Cannon. He lives in Philadelphia with his wife, three children, and his sanity, although that may be moving out soon. He occasionally searches the classifieds for the bulk sale of spiders and uranium but hasn’t had any luck yet. Find him online at IsaiahCampbell.com.
Loading...
or
Not Currently Available for Direct Purchase