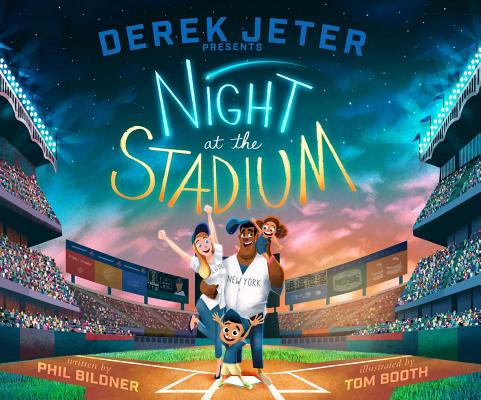 A baseball stadium comes to life in this magical picture book brought to you by legendary sports icon and role model Derek Jeter.

Seven-year-old Gideon is overjoyed to be at Yankee Stadium watching his favorite team win! And when the game is over, he’s going to get an autograph from his favorite player. However, Gideon gets separated from his family and then he tumbles into a secret part of the stadium. There he discovers a magical world where everything from the rakes and the hoses to the bats and balls to the food to the monuments in Monument Park has a story to tell. But can Gideon finally find his family and get the autograph he really wants?

An enchanting combination of Night at the Museum and Alice in Wonderland—with a little bit of Field of Dreams thrown in for good measure!—this book captures the excitement, wonder, and magic of your first trip to the ballpark!

Tom Booth, illustrator of Jeter Publishing’s Night at the Stadium, and the author and illustrator of Don’t Blink, has worked in both animation and publishing since graduating from Hamilton College. Tom made his earliest marks—sometimes on his parents’ antique kitchen table—growing up in Pennsylvania. Now living in Brooklyn, New York, Tom is currently at work on several picture books at a table all his own.
Loading...
or
Not Currently Available for Direct Purchase