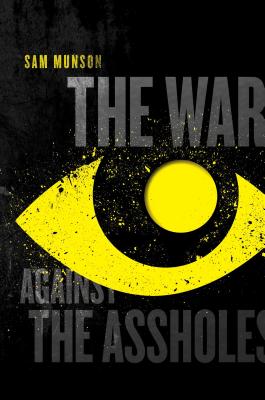 The War Against the Assholes (Hardcover)

Contemporary fantasy meets true crime when schools of ancient sorcery go up against the art of the long con in this stunningly entertaining debut fantasy novel.

Mike Wood is satisfied just being a guy with broad shoulders at a decidedly unprestigious Catholic school in Manhattan. But on the dirty streets of New York City he’s an everyman with a moral code who is unafraid of violence. And when Mike is unwittingly recruited into a secret cell of magicians by a fellow student, Mike’s role as a steadfast soldier begins. These magicians don’t use ritualized rote to work their magic, they use willpower in their clandestine war with the establishment: The Assholes.

Sam Munson’s writing has appeared in n+1, Tablet, The New York Times, The Wall Street Journal, The National, The Daily Beast, Commentary, The Times Literary Supplement, The New York Observer, The Utopian, and numerous other publications. His first novel, The November Criminals, is being adapted into a film.

Praise For The War Against the Assholes…

"Somehow Sam Munson has you believing in his urban-teen-grift-noir-magician-brawl from paragraph one. WAR AGAINST THE ASSHOLES is original, sharp, and mean and it crackles with attitude and style. Death to the assholes! Long live the assholes!"-- Paul Tremblay, two-time Bram Stoker Award nominee and author of A HEAD FULL OF GHOSTS
— Paul Tremblay
or
Not Currently Available for Direct Purchase
Copyright © 2020 American Booksellers Association