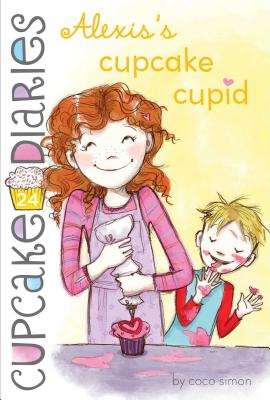 He loves me, he loves me not…Alexis leaves a Valentine’s Day surprise for her crush. Does he like her back?

Despite objections from her Cupcake Club pals, Alexis makes a special valentine cupcake for her crush, Emma’s older brother Matt, and leaves it for him next to his computer. Alexis is secretly hoping Matt will get the hint and give her a valentine, too. But ever since Alexis left the cupcake, Matt’s been acting really uncomfortable around her. Does Matt want to be her valentine or doesn’t he?

With no certain valentine in sight, Alexis ends up leaving a surprise valentine’s gift on Emma’s desk, because, after all, crushes may come and go, but BFFs are forever!

From cupcakes to ice cream and donuts! Having written over thirty books about middle school girls and cupcakes and ice cream, Coco Simon decided it was time for a change; so she’s switched her focus to her third favorite sweet treat: donuts! When she’s not daydreaming about yummy snacks, Coco edits children’s books and has written close to one hundred books for children, tweens, and young adults, which is a lot less than the number of cupcakes, ice cream cones, and donuts she’s eaten. She is the author of the Cupcake Diaries, the Sprinkle Sundays, and the Donut Dreams series.
or support indie stores by buying on
Copyright © 2020 American Booksellers Association