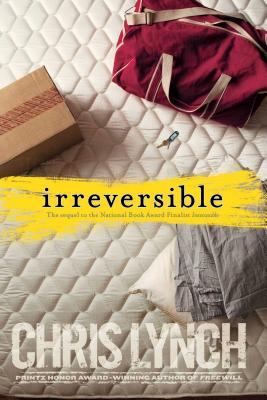 The accused date rapist from the “finely crafted and thought-provoking” (School Library Journal) National Book Award Finalist, Inexcusable, must confront the kind of person he really is and come to terms with his past actions, in this stunning sequel from Printz Honor–winning author Chris Lynch.

Keir Sarafian insists he did nothing wrong. But no one will believe that he’s the good guy he knows he is—no one except his father, Ray. And Ray is just the person Keir has to get away from in order to have the fresh start he deserves.

Now at Carnegie College, Keir’s life isn’t what he thought it would be. Two soccer players are poised to take his spot as kicker. Ray keeps calling, and Joyce, his guiding light on campus, seems to be avoiding him. When tragedy strikes, will Keir finally be able to confront his past actions and realize his potential?

"Although it is at times challenging to empathize with Keir, this book fills a unique gap in rape literature with its focus on the rapist and his struggle... Brimming with hard truths."
— Booklist

"Teens left hanging about Keir’s and Gigi’s fates will want to know the outcome, although the lack of a satisfying resolution is realistic. As with the earlier title, this one provides plenty of fodder for discussion."
— School Library Journal

"... A highly plausible exploration that resists the good guy/bad guy binary that got Keir into this mess in the first place; its nuance demands thoughtful reading, and it’s guaranteed to elicit spirited discussion."
— BCCB, STARRED REVIEW