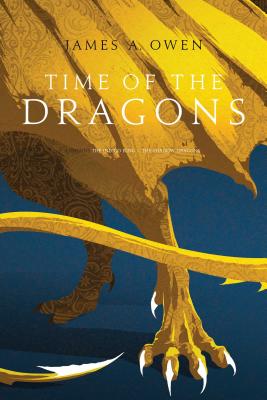 Time of the Dragons

The Indigo King; The Shadow Dragons (The Age of Dragons #2)

James A. Owen continues to take readers on a journey through the fantastical world of beloved fantasy, where dragons are real, and dreams—and nightmares—come true.

John and Jack, two of the Caretakers of the Imaginarium Geographica, have discovered a plea for help on an ancient medieval parchment—it is not only addressed to them, but seems to have been written by their friend, Hugo Dyson. Yet before they can discover the origin of the strange book, Hugo walks through a door in time—and vanishes into the past. And, just like that, the world begins to change.

The only hope to restore the proper order of things lies in a forgotten island at the edge of the Archipelago, where a time travel device left by Jules Verne must be used to race through history itself—from the Bronze Age to ancient Alexandria and the founding of the Silver Throne. But even if all of the legendary Caretakers from past and present are able to answer the oldest mystery in the world and save Hugo, darker forces may still be gathering against them, and a greater crisis may be at hand. Together with a new enemy, the Imperial Cartological Society, the Shadow King may be unstoppable. The only hope may in the Grail Child, Rose Dyson, and her companions’ desperate quest to find the only weapon capable of defeating their enemies and the Spear: the broken sword Caliburn.

With page-turning action and a great twist, this story is a classic among classics—a volume to be treasured and gifted to those we love.

James A. Owen is the author of the Chronicles of the Imaginarium Geographica series, the creator of the critically acclaimed Starchild graphic novel series, and the author of the Mythworld series of novels. He is also founder and executive director of Coppervale International, a comic book company that also publishes magazines and develops and produces television and film projects. He lives in Arizona. Visit him at HereThereBeDragons.net.
Loading...
or
Not Currently Available for Direct Purchase