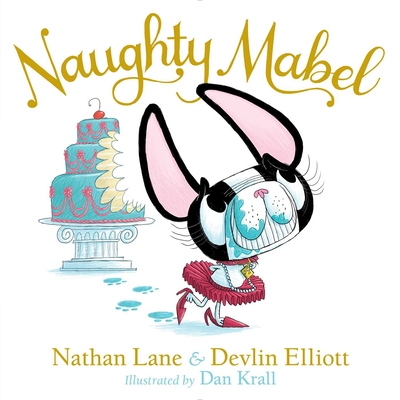 A pampered pup takes center stage at her parents’ party in this charmingly hilarious picture book from film and Broadway star Nathan Lane (of The Lion King and The Producers fame) and Devlin Elliott!

Meet Mabel, the fanciest French bulldog the Hamptons have ever seen. Mabel is many things: sassy, classy (and sometimes a bit gassy!), but especially...naughty! Mabel’s always getting herself into trouble—and with style like hers, can you really blame her? When Naughty Mabel’s parents throw a party and try to leave her out of the fun, of course she must take matters into her own perfectly pedicured paws. As the hilarity ensues, Mabel and her parents learn that through thick and thin, naughty or nice, they’ll always be a family, just as they are.

"If Eloise had been a dog, she would have been Naughty Mabel"
— School Library Journal

"Mabel is somewhere between Fancy Nancy and Rotten Ralph, and her fashionable destruction is sure to charm little ones."
— Booklist

Nathan Lane is an award-winning star of stage, screen, and television. In the theater he has won two Tony awards, five Drama Desk awards, two Obies, and the Olivier award. In 2008 he was inducted into the American Theater Hall of Fame. On television he has had recurring roles on American Crime Story, Modern Family, and The Good Wife. He has received six primetime Emmy nominations, two daytime Emmy awards, and the People’s Choice award. He has made over thirty-five films, including The Birdcage, The Lion King, Mousehunt, Stuart Little, The Producers, and Carrie Pilby.

Devlin Elliott is the co-owner of Maberry Theatricals, Inc. and is a Tony-nominated Broadway/Off-Broadway and West End producer. As a writer he’s recently finished his first play, a television pilot, and the second Naughty Mabel book with Nathan.

Dan Krall is an author, illustrator, and an animator. He worked as a character designer on the popular films How to Train Your Dragon and Coraline. He was also the art director for the television shows Scooby Doo! Mystery Incorporated, Chowder, and Samurai Jack, as well as a Development Artist for Foster’s Home for Imaginary Friends, The PowerPuff Girls, and Dexter’s Laboratory. He lives with his wife and daughter in Los Angeles.