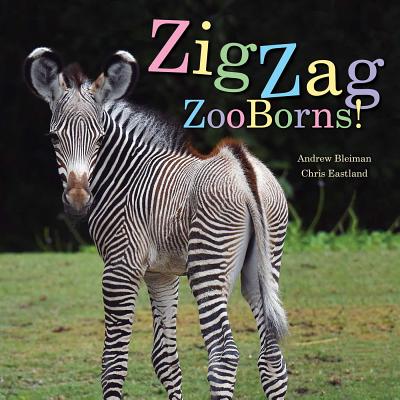 Get to know a whole new herd of zoo babies in this darling picture book about colors and patterns from the creators of ZooBorns.com.

Calling all animal enthusiasts! It’s time to learn about colors and patterns with a crew of irresistible zoo babies. Featuring adorable animal photos, a zippy text, and a fact-filled glossary, this just might be the cutest concept book ever to hit the shelves!

Andrew Bleiman is a lifelong animal nerd who graduated from the University of Pennsylvania with a degree in English Literature and a yet to be recognized minor in Baby Animalogy. He attributes his fascination with zoology and conservation to monthly childhood trips to the Wildlife Conservation Society’s Bronx Zoo. He lives in Seattle with his wife, Lillian, and daughter, Avery.

Chris Eastland is a classically trained artist and freelance designer who studied and taught at the Charles H. Cecil Studios in Florence, Italy. Chris was formerly the Photography Editor for Quest Magazine. He lives in Brooklyn, New York with his girlfriend, Emilie, their cat Georgie, and their dog Holden.

Newborn animals in zoos and aquariums across the world are welcomed in this photographic exhibit meant to draw attention to the important conservation role these organizations maintain for many endangered species. A brief greeting introduces each new arrival featured across the gutter in a bold, close-up color photograph; it's followed by a quick review that asks children to specifically note the coloring, pattern, and texture of the animal. "Hello, Orys! Though Orys is tiny compared to his mother, this Indian rhinoceros tyke weighed an impressive 150 pounds a few days after birth. See his thick bumpy gray skin? It helps protect him from sunburn and insect bites." Some animals will be familiar, such as the giraffe calf or the cheetah cub. All are adorable and intriguing, even the diamondback terrapins, while some are especially eye-catching, such as the golden lion tamarins or the baby langur. Seventeen animals are included, giving children a fair survey of species. An addendum succinctly provides more information for each, including the species, the particular zoo or aquarium each baby is housed in, the animal's endangered status, and a few key facts. A striking, beautiful, and clearly focused bundle of cute.
— Kirkus Reviews

Though people of all ages love looking at baby animals, this ZooBorns title targets the youngest set by using adorable photos of baby animals from zoos around the globe to introduce the concepts of colors and patterns. Many of the 17 vulnerable and endangered species will be familiar, such as the giraffe and tiger babies, while a few lesser-known animals, like the tamarin or tapir, may be new to children; but all the baby animals are sure to delight readers of any age. Double-page spreads consist of a high-quality, fullpage photograph of the animal and two to four sentences of large text on the facing page. The text includes a salutation to the animal or set of animals, a physical description, and some basic information on the creature(s). Color and pattern words are highlighted and presented in an even larger font. For instance, Orys, a baby rhino, has “bumpy gray” skin that protects him from sunburn. Concluding pages provide more details on the animals, including their home zoo and conservation status. — Angela Leeper
— Booklist Online
or
Not Currently Available for Direct Purchase
Copyright © 2020 American Booksellers Association