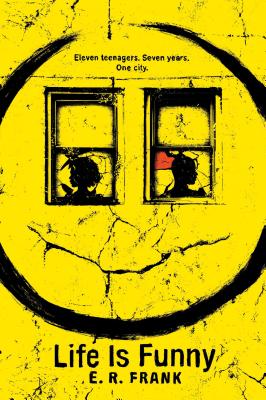 E. R. Frank’s seminal first novel weaves together the stories of eleven teenagers in one city over seven years in this groundbreaking and “impressive debut” (Publishers Weekly, starred review).

Why does Gingerbread always have a smile on his face? “Because life is funny,” he tells Keisha. But for her—and almost everyone else in her Brooklyn neighborhood—there doesn’t seem to be much to laugh about.

China, Ebony, and Grace are best friends, but Grace’s mother isn’t crazy about her being friends with two girls who aren’t white, and each cut Ebony makes on her wrist seems to drive them even further apart.

Just across the schoolyard there’s Eric who has to raise his younger brother Mickey, even though no one expects him to amount to anything. Meanwhile, Sonia’s Muslim parents expect everything of her, and it may be more than she is able to give after she suffers a shattering loss.

When Drew brings his father’s Jaguar into Sam’s family’s auto body shop across town they seem to be from opposite sides of the tracks, but Drew’s the one hiding a dark family secret. And he’s not the only one.

Praise For Life Is Funny…

"Well-written and impressive debut....Readers...will enjoy the triumphs and be empathetic to the tragedies."