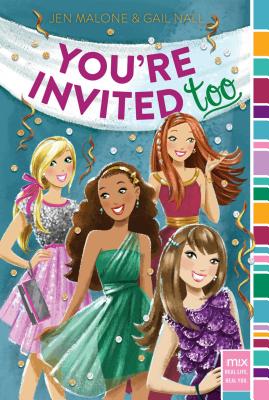 You're Invited Too (mix)

Four best friends learn that running a party-planning business isn’t the good time they thought it would be in this fresh and funny tween novel from the authors of At Your Service and Breaking the Ice.

Summer may have come and gone, but for the girls of RSVP, things are just heating up!

They put together some of the best parties in town over the summer, and now the tween party-planners have been hired to plan a big-time wedding. Only problem? The Bridezilla’s demands are increasingly loony, and Sadie, Lauren, Becca, and Vi need to figure out how to handle her without going crazy themselves. But with school back in session and less time on their hands, managing the bride isn’t so easy!

Lauren is having an especially hard time with the balancing act, and when her grades start to suffer, she’s seeing red. Vi’s dad has also started his new job as janitor at their middle school and really, could there be anything more mortifying than that? According to Becca—yes. Because she’s just learned that she needs braces…and she isn’t happy about it. And Sadie’s already-strained relationship with her mom has not been helped by RSVP’s raiding of Mom’s VIP bride.

But when a hurricane threatens Sandpiper Beach and the first-ever RSVP wedding, all four girls must gain a new perspective fast…before this first walk down the aisle becomes their last.

Praise For You're Invited Too (mix)…

After successfully establishing their party-planning venture, (You're Invited, 2015) the four friends behind RSVP feel ready to handle their first wedding. However, seventh-graders Sadie, Lauren, Becca, and Vi soon encounter a raft of obstacles, both collectively and individually, as they work to arrange the wedding of an outrageously demanding bride-to-be. Each girl narrates the tale from her individual perspective in alternating chapters that began with snippets reflecting the girls' personalities: Sadie's to-do lists, Lauren's vocabulary words, Vi's recipes, and Becca's horoscopes. Malone and Nall explore topics such as complicated parent-child dynamics, mean girls, new crushes, first kisses, and the pressures to be a perfect student. Amid the flurry, Sadie frets about her mother, Lauren's plans to schedule mandatory fun time go awry, the new boy in town captures the effervescent Becca's interest, and Vi contents with the continual taunts of Linney. An impending hurricane and the resulting evacuation to their middle school provide the catalyst for the girls to resolve their concerns. Throughout the tale, the authors highlight the loyal, genuine friendship the girls share. As the quartet endure the bride-to-be's antics, wild weather, and life dilemmas, they gain a renewed appreciation of their friendship, recognizing that they can rely upon each other to weather life's upheavals. In this lively sequel, both fans and readers new to the story can enjoy the enterprising endeavors of these steadfast friends. (Fiction. 11-14)
— Kirkus Reviews

Gail Nall lives in Louisville, Kentucky, with her family and more cats than necessary. She once drove a Zamboni, has camped in the snow in June, and almost got trampled in Paris. Gail is the author of the middle grade novel Breaking the Ice, the coauthor of You’re Invited and You’re Invited Too, and the author of the young adult novel Exit Stage Left. You can find her online at GailNall.com and on Twitter as @GaileCN.
Loading...
or
Not Currently Available for Direct Purchase