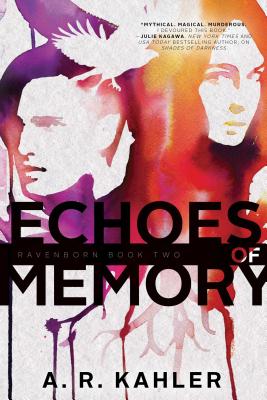 After witnessing a terrible event that left Kaira changed in unimaginable ways, Chris knows he has to find a way to defy his destiny in this second novel in the suspenseful Ravenborn series.

In the aftermath of the deaths plaguing Islington’s campus, a terrible pall has fallen over the students. Kaira is passed-out sick, and Chris—the only witness to the night Kaira invoked something otherworldly—is questioning his sanity. Everyone is willing to believe the deaths were normal, and without Kaira backing him up, his claims that there was something supernatural at work are getting harder and harder to believe. Even to himself.

Especially because now, the voices he’s locked away are getting louder. Stronger. Violent.

When the god plaguing his mind starts promising Chris a future of bloodshed, Chris knows he isn’t safe. He can’t be trusted. Especially not around Kaira, whom this god swears Chris will kill.

Chris only wants to keep his friends safe. Even at the cost of his own life.

But when the gods of the Underworld are involved, not even death is an escape. It’s just the start of another, darker, journey.

A.R. Kahler is the author of the Cirque des Immortels trilogy and the post-apocalyptic YA fantasy series, The Hunted. When he’s not writing or climbing in the rafters, he’s probably outside, staring at the clouds. Visit him online at ARKahler.com and follow him on Twitter at @ARKahler.
or
Not Currently Available for Direct Purchase
Copyright © 2020 American Booksellers Association