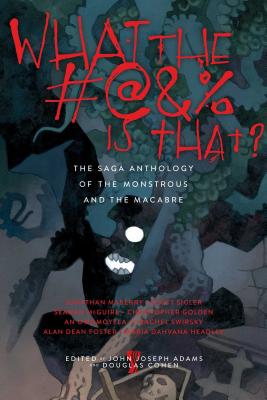 The Saga Anthology of the Monstrous and the Macabre

The Saga book of all contain the line “What the @#&% is That?”—is often humorous, sometimes terrifying, but always incredibly entertaining.

Ranging from irreverent humor to straight out horror, What the @#&% Is That? grew from a meme on Twitter when iconic comic book artist Mike Mignola painted a monster. Nobody knew what the F it was, but they loved it.

Renowned editors John Joseph Adams and Doug Cohen then asked some of the best writers in the fantasy, horror, and thriller genres including Jonathan Maberry, Seanan McGuire, Christopher Golden, and Scott Sigler to create a monster story that included the line “WTF is that?”

This anthology is a feast for the imagination for anyone who loves monsters.

Douglas Cohen (DouglasCohenEditorial.com) is the coeditor of the anthology, Oz Reimagined: New Tales from the Emerald City and Beyond. He is a former editor of Realms of Fantasy Magazine, where he worked for six and a half years. In the magazine’s final year, it published its one hundreth issue, won a Nebula Award, and was nominated for a second one. Douglas is also a writer, and his stories have appeared in Weird Tales. Additionally, he is the author of Realms of Fantasy: A Retrospective, a book collecting his detailed blog entries on every single issue published during the magazine’s sixteen year history.
Loading...
or
Not Currently Available for Direct Purchase