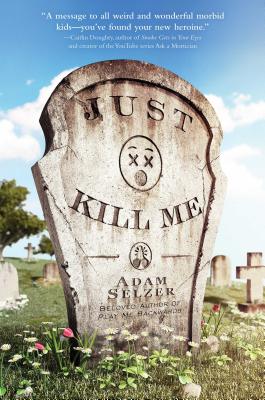 From the author of Play Me Backwards and I Kissed a Zombie and I Liked It comes a dark comedy about one teen’s unusual summer job as a ghost tour guide in Chicago.

When the last letters in her alphabet cereal are D, I, and E, she doesn’t crawl right back into bed.

When her online girlfriend won’t text a photo, she just sends more of herself.

And when she realizes that Cynthia, her boss at a Chicago ghost tour company, isn’t joking about making stops more haunted by euthanizing people there, she doesn’t quit her job—she may even help.

But soon she learns people in the murdermonger industry are being murdered, and doesn’t know who it is doing it. Could it be the head of the rival tour company? Or could it be someone near and dear to Megan?

After she realizes she has an uncanny resemblance to a flapper who disappeared in 1922, Megan receives a warning she can’t ignore: the next ghost on the tour might be her…

Praise For Just Kill Me…

"Ominous, unsettling, and dripping with snark, Just Kill Me is a delicious dark comedy that will leave readers jumping at shadows and waiting for a knife in the back. The ending still haunts me."
— Delilah S. Dawson, author of Hit

"Just Kill Me is a hilarious punch to the brain. Quirky and full of Chicago ghost history, I raced through the pages to see who would go from murdermonger to good old fashioned murderer. I loved every page!"
— Demitria Lunetta, author of In The End

"A message to all weird and wonderful morbid kids– you've found your new heroine."
— Caitlin Doughty, author of Smoke Gets in Your Eyes and creator of the YouTube series Ask a Mortician

*"Selzer has outdone himself with a narrative brimming with delightfully macabre irreverence, mystery, and the growing pains of self-acceptance."
— Kirkus Reviews, starred review

"From its oddball deadly heroine to its unconventional genre-mixing to its surprising final act, much about this novel is memorable...The creep factor is perfectly executed and, as in any good ghost tour, relies more on storytelling technique than guts and gore.”
— BCCB

"Funny, ominous, and infused with a dose of facts about Chicago’s murderous past, appealing for history buffs and wannabe ghostbusters alike"
— Booklist