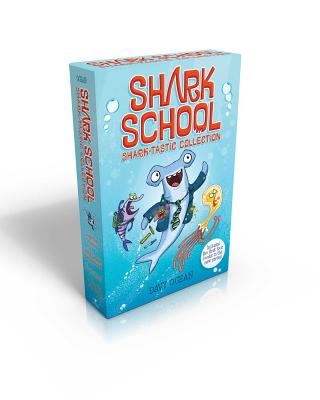 The first four books of the Shark School series are now available in a fin-tastic, collectible boxed set!

This boxed set includes four Shark School tales, each one an exciting (mis)adventure!

In Deep-Sea Disaster, a class trip to a famous shipwreck almost ends in disaster for Harry Hammer and his pals. In Lights! Camera! Hammerhead!, humans arrive at Shark Point to film an underwater documentary and Harry wants a starring role. But his dreams start turning to nightmares when arch rival Rick Reef also wants a part in the movie! In Squid-napped, Harry leaves Shark Point for faraway waters—and comes face to face with a ravenous giant squid who hasn’t had his lunch yet! And in The Boy Who Cried Shark, Harry thinks he spots a fierce great white shark and sounds the alarm—but turns out it’s just an old basking shark and now everyone is furious. When Harry sees a REAL great white, will anyone believe him?

Davy Ocean is the pseudonym of a collective of writers from the creative agency Hothouse Fiction, based in London.

Aaron Blecha is an artist and author who designs funny characters and illustrates humorous books. His work includes the Shark School series and Goodnight, Grizzle Grump! Originally from Wisconsin, Aaron now lives with his family by the south English seaside.
Loading...
or support indie stores by buying on